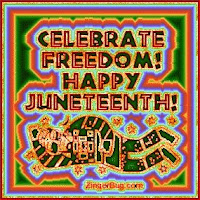 If you have been following my blog recently you have figured out I am 'in" to celebrations and today is such a day.
The first observance of Father's Day took place in Fairmount, West Virginia July 5, 1908. Mrs. Grace Clayton wanted to celebrate the lives of 210 fathers whose lives had been lost in Monogah, West Virginia's mining disaster. For the next 40 years several presidents recommended national observances but stopped short of issuing a national proclamation for Father's Day. In 1966 President Lydon Johnson issued first presidential proclamation designating the third Sunday in June as Father's Day. In 1972 Richard Nixon signed this proclamation into law making it an official national holiday. Follow this link to see what date other countries celebrate fathers and honor fatherhood. http://en.wikipedia.org/wiki/Father%27s_Day
Take time today to say "thanks" to someone who is a father or a father figure making a difference in a child's life.
June 19 is Juneteenth Day and another day to pause-remember and celebrate! It is also called Freedom or Emancipation Day. It is a holiday in the United States honoring African American heritage by commemorating the announcement of the abolition of slavery in the U.S. state of Texas in 1865. It is recognized as a state holiday in 37 states of the United Sates. The state of Texas is widely considered the first U.S. state to begin Juneteenth celebrations. Today many states observe this holiday with barbecues, picnics, parades, family gatherings, public speeches, prayer, music and dance.
Juneteenth is a day that stands for the dignity and equality of all citizens, regardless of race, so that all may share in the blessings of freedom that America provides.
George W. Bush, 2005
Jelly Cake is a very popular dessert in the south often served at picnics and barbecues. This is my version of it in a cupcake form.
Lemon-Raspberry Cupcakes
Ingredients;
Directions:
Frosting
Beat:1-1/2 remaining powdered sugar, 2 TB. lemon juice and 1-1/2 tsp lemon peel
Might have to add some milk for better frosting consistency
Option: adding 1 TB. raspberry jam to some of the frosting so six cupcakes pale lemon and 6 raspberry colored frosting
at June 19, 2011