"It Depends on Us... Another year lies before us like an unwritten page, an unspent coin, an unwalked road, the pages will read, what treasures will be gained in exchange for time, or what we find along the way, will largely depend on us."
-- Esther Baldwin York 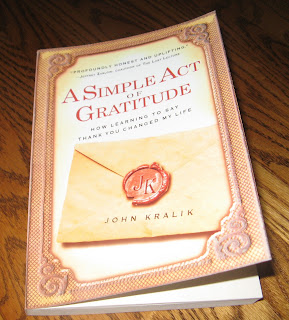 John Kralik, author of the book A Simple Act of Gratitude, was at mid-life crisis stage when he decided he could not spend another year in the self destruction mode he had been heading towards. On New Year's Day in 2008 he reflected on the fact his personal and professional life were in shambles and it was time to make some new resolutions. He had always wanted to be a writer but had set that career aside to be a lawyer. He yearned to do something more meaningful with his life. When his ex-girlfriend sends him a simple thank you note for a gift it was the inspiration he needed to feel grateful for what he had and re-look at a postponed writing career. On that  New Year's Day he made a resolution to embark on a journey writing a thank you note each day for 365 days. He wrote notes to family members, friends, co-workers, service people and many others who had touched his life. During  his year long writing campaign Kralik began to notice that he was rewarded with unexpected kindness, love, respect and even a repayment on an outstanding loan. During his year long quest of note writing it reinforced his conviction that handwritng is important, even in business a handwritten note plays an important part, it is an exercise in good manners, each of us has more in our lives to be grateful for than we think and it is never too late to turn your life around.
What impressed me about John Kralik's story was his commitment to writing a thank you note a day for a total of 365 days. Which leads me to comment how few written notes we even receive in the mail today. Twitter, email and other social networking systems keep us all so connected in ways people do not feel the need to write notes and put them in the mail. One important idea I did take away from this book is finding one person a day in our lives to show gratitude and say thank you. Check out this inspiring story. I even found out it can be downloaded to a Kindle or NOOK:)
Oh, and I do want to stop here and say thank you to those who have kept up reading Ever Ready blog postings. I just recently realized since 9/3/09 I have written 412 blogs. Wow... think of all the food consumed along the way testing recipes.
_____________________________________________________
A comment about white sauce called bechamel used in the Sausage-Chicken Manicotti. I did list ingredients but not directions. The sauce is easy.
Melt 1/4 cup butter and whisk in 1/4 cup flour
Cook on low heat for 1 minute
Whisk in 2-1/2 cups 2% milk, 1/4 tsp. pepper, 1/4 tsp. salt, 1/8 tsp. nutmeg bring to simmer stirring constantly till thickens
Add 1/3 cup Parmesan cheese and stir in
Remove from heat
at January 07, 2012