Welcome to Jim's Apple Farm and Minnesota's largest candy store.
It's a bright yellow hangar-like building that calls to motorists heading south along 169 to Mankato, MN 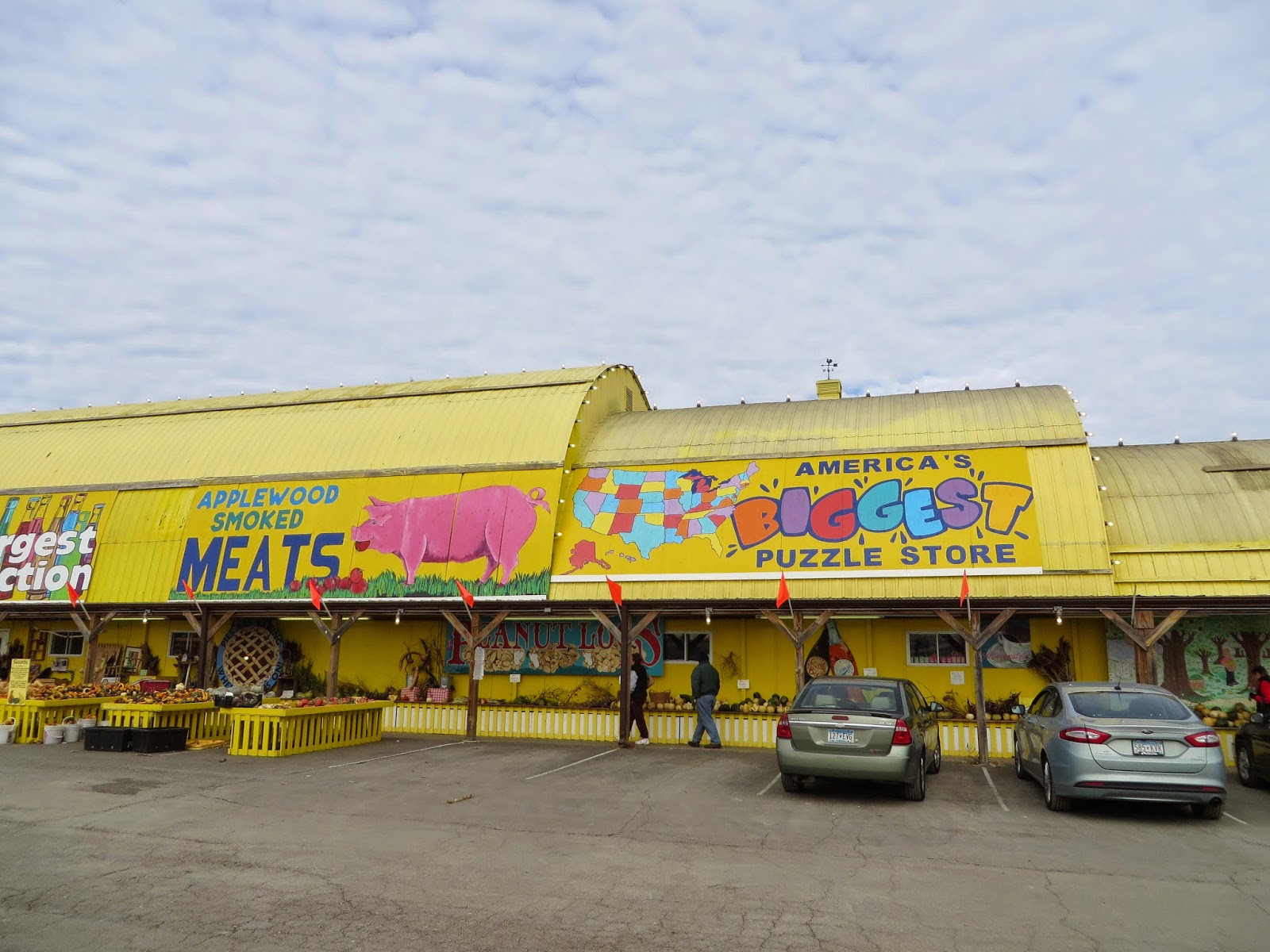 This place has just about every variety of candy and specialty sodas you can imagine. The puzzle selection, however, was the best. If you like jigsaw puzzles this is the place! They had many very high quality puzzles. And possibly the best and freshest caramel apple I'd had in years. They only take cash and checks, no credit cards. But there are ATMs every 15 feet or so.

Retailers call on ad agencies with the goal of increasing traffic. Robert Wagner, owner, just drives to the hardware store and picks up more yellow paint. An entire marketing plan summed up in a word: marigold.

"You can never have enough yellow fence," Robert laughs.
Apparently not. Sections of Robert's marigold picket fence line more than a mile of Minnesota Highway 169 between Jordan and Belle Plaine,MN. 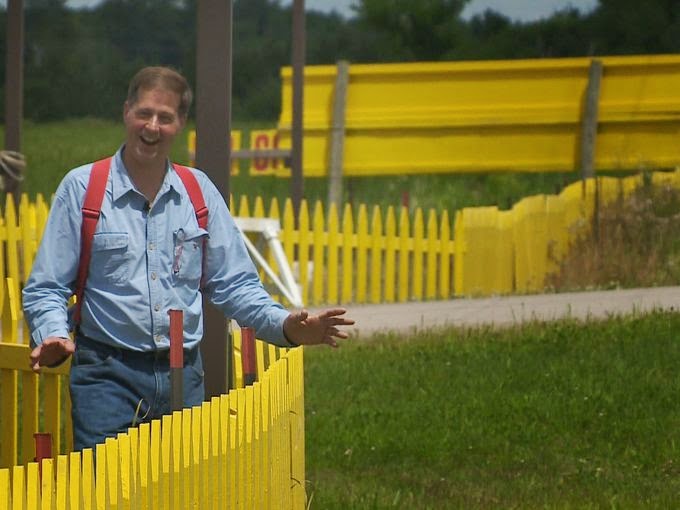 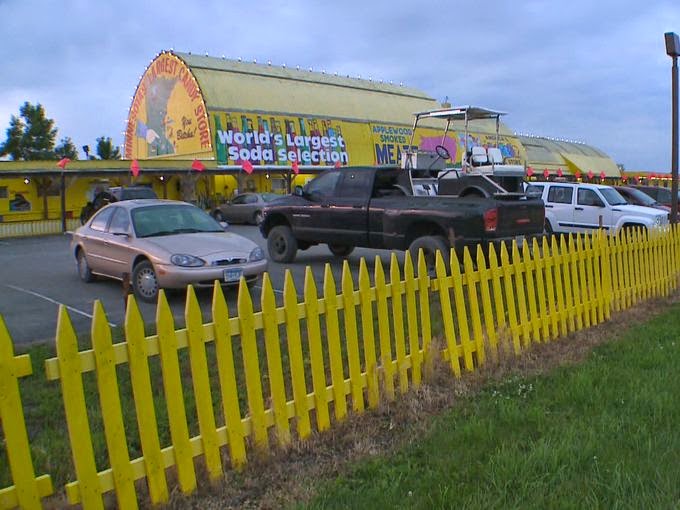 "I'll give you that," says the man in the red suspenders. "It's different."

Different could well be the cornerstone of the Wagner family business. Let's start with the store's chief pie baker, Herbert Wagner. He is 88-years-old, nicknamed Hippy and also happens to be Robert's father. "Chocolate, chocolate, chocolate," Hippy rattles off in quick succession during a hasty tour of the store. Quick is all Hippy does when pies are in the oven. He darts to another section of the store. 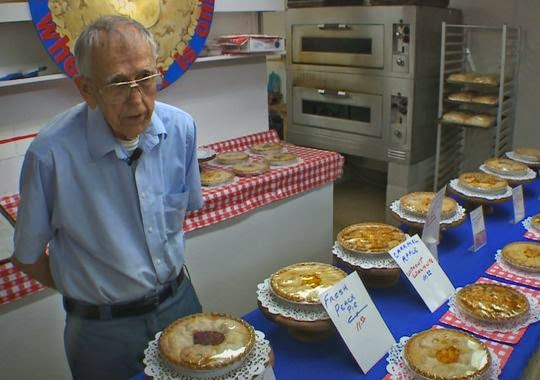 So if the World's Largest Candy Store doesn't do social media, websites, phone numbers, scanners or credit cards - what does it do? Polkas. Yep, "Hippy's favorite music, it's seven songs and they're on replay all-day-long," explain the Maddies (two cousins working at the store).
"They're right," smiles Hippy.
Nothing makes Hippy happier than seeing excited customers dancing in the aisles.
And maybe, just maybe, Minnesota's Largest Candy Store is succeeding, not in spite of the polka music, yellow paint and countless other quirks, but because of them. "We want to be different, we want to be unique," says Robert.
He points to any number of ubiquitous convenience stores that dot America's landscape. "There's no need to all be the same."

So, if and when, the owner, Robert Wagner who doesn't read business books, writes his own, he's likely to mention warm and inviting service, the front windows are washed TWICE a day and the irresistible aroma of Hippy's pies, baked fresh and sold hot all day.
He'll also add this: "A quote from PT Barnum, 'The noblest art is making people happy.'"


The man in the red suspenders, Robert Wagner, pauses and smiles. "That sums up a lot," he says. His will be the first business book to advance the theory, the best offense is a good marigold fence. 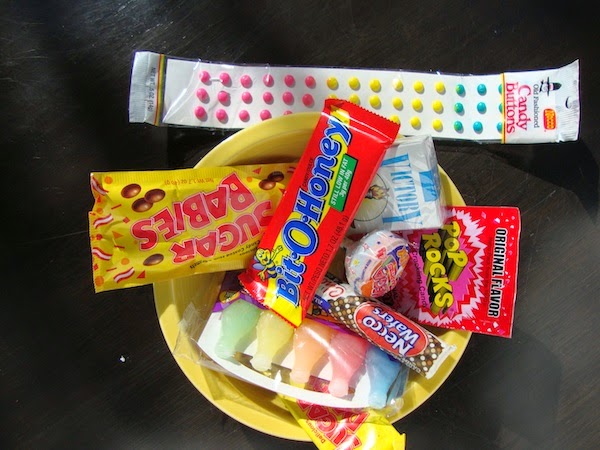 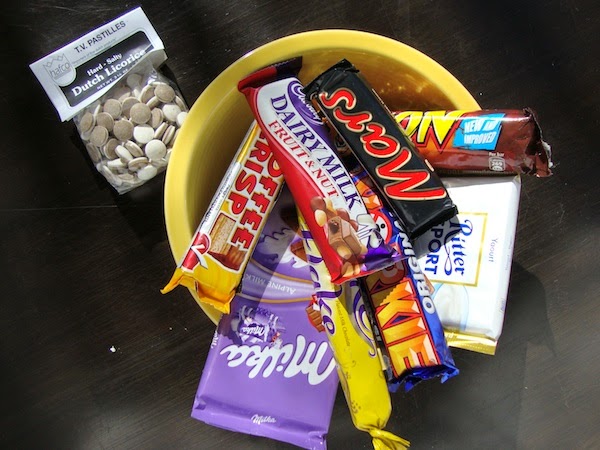 Inside the yellow hangar are tables and tables of candy. There’s no fancy retail shelving or end caps and all the signs are hastily handwritten. Two kinds of candy-lovers are going to be very happy here: retro candy junkies and those nostalgic for the chocolates they fell for while backpacking around Europe.

How can you not smile when you see Pop Rocks for the first time in 20 years? Or candy buttons, Nik Nips (those wax bottles filled with colored sugar water), Smarties lollipops (the ones shaped like UFOs), Sugar Daddies, Sugar Babies, Charleston Chews, and candy necklaces. There’s a huge display of candy cigarettes, too, which might make some people nostalgic, even though, really, can anybody say they liked those chalky white flavorless sticks? (And, yes, their sale is banned in St. Paul, MN and some other municipalities).

Candy only takes up about half the store, however. The rest is given over to apples, homemade pies (fresh and frozen), a ten-foot long shelf of local fruit preserves, and another, just as long, of pickled things, from green beans to eggs. Four cooler cases hold dozens and dozens of small-brand sodas, and one whole case is dedicated solely to root beer.
Check out these shelves and shelves of soda 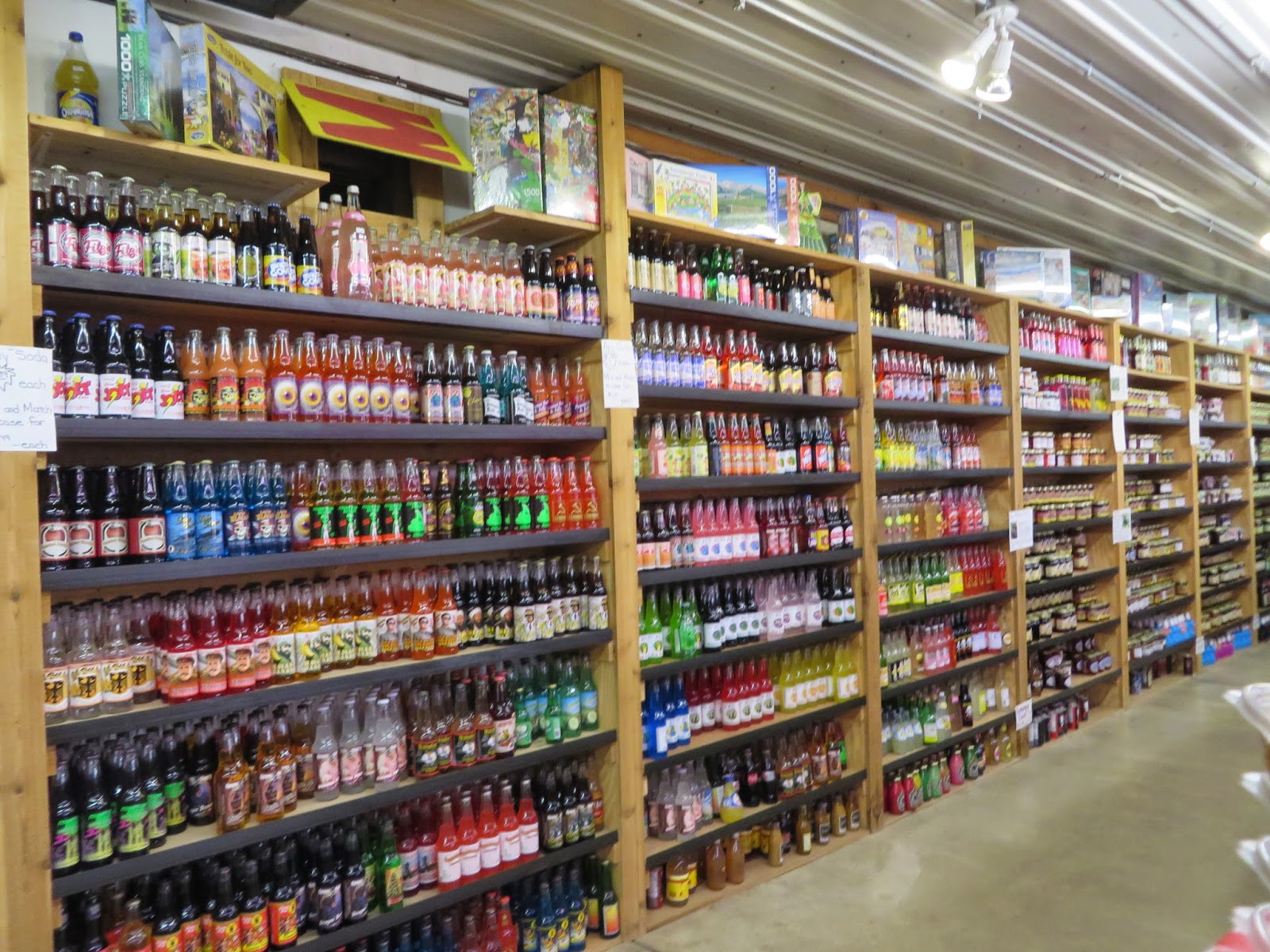 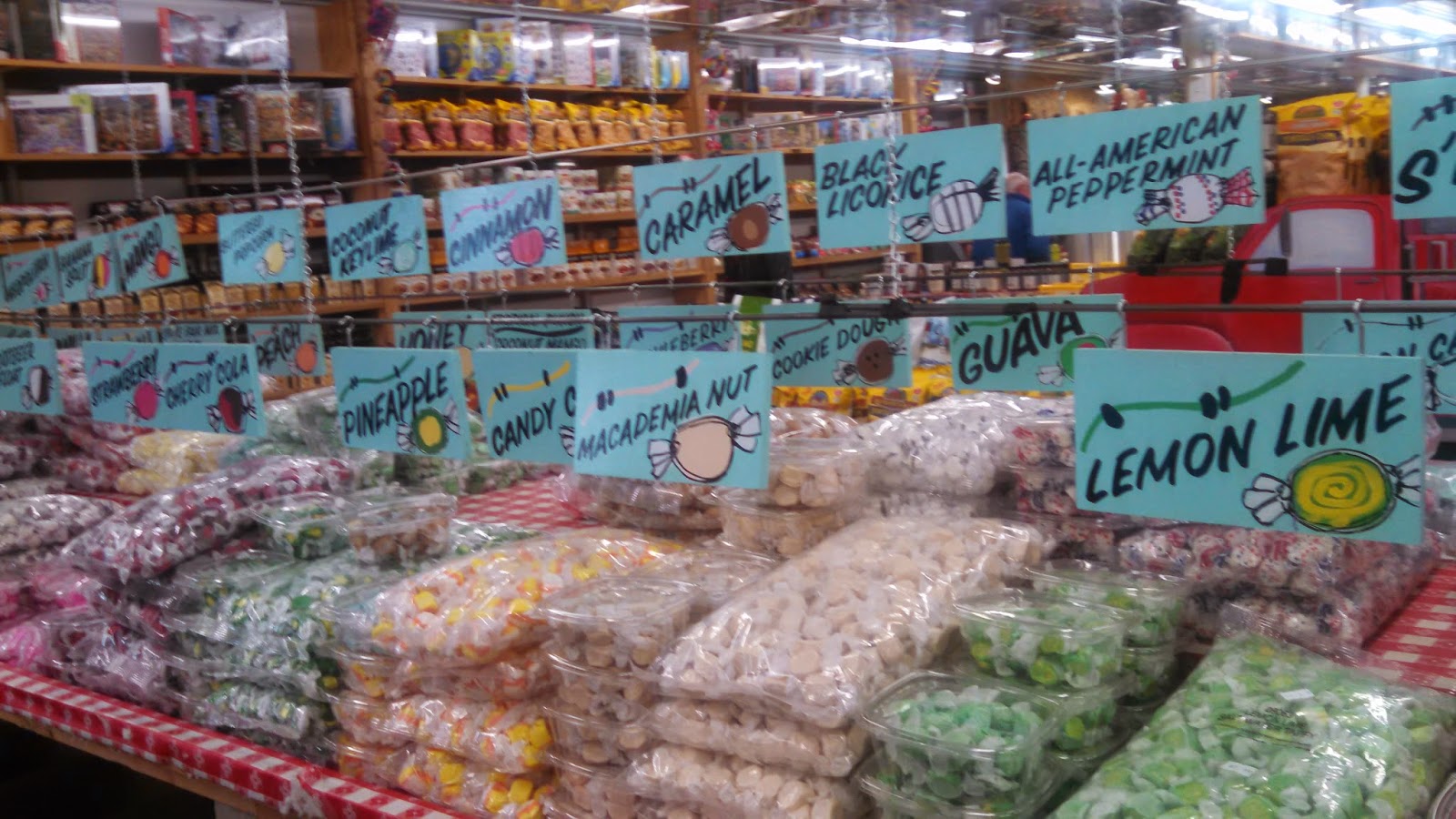 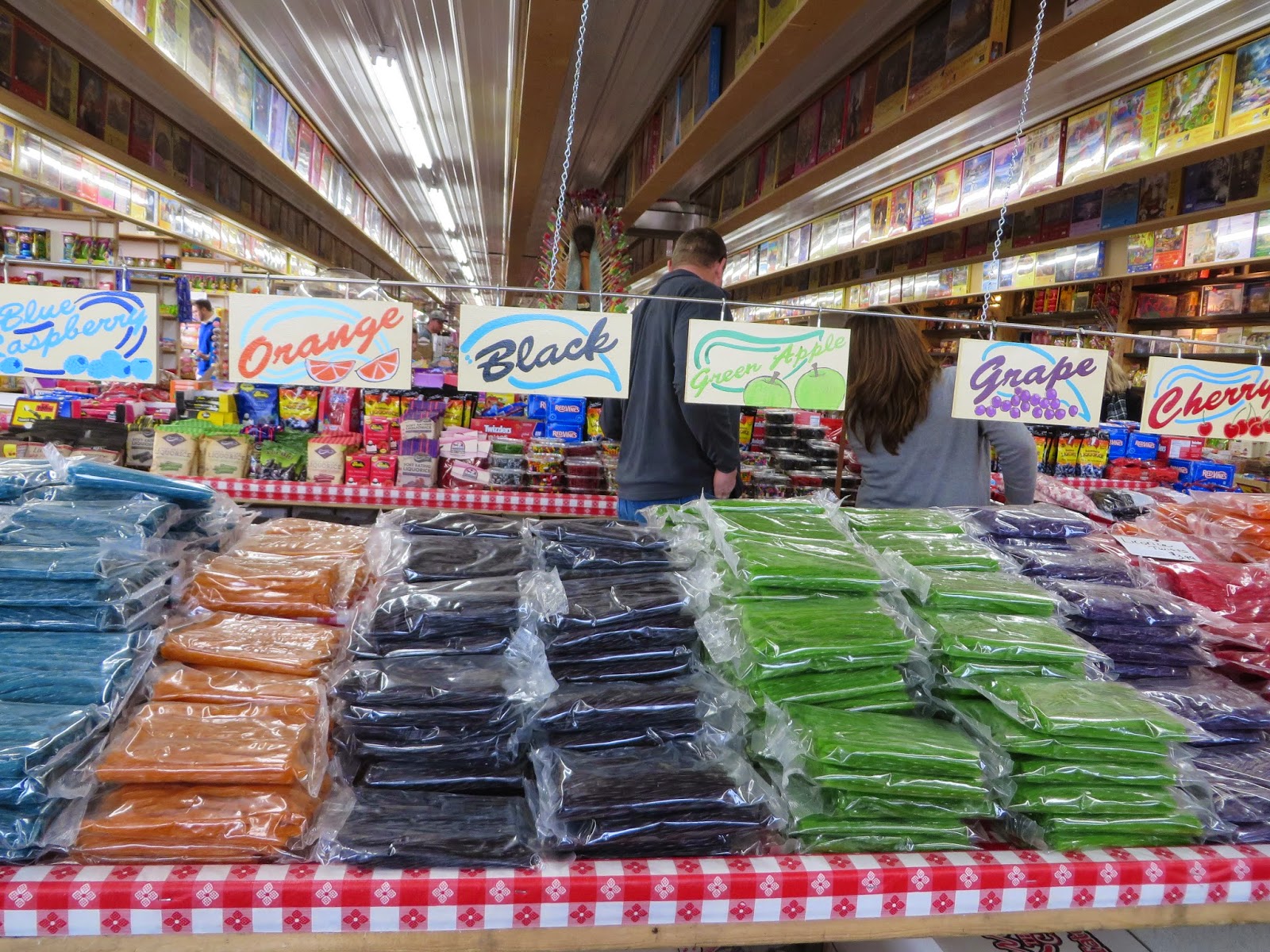 and licorice flavors.
Oh, my, oh, my! Makes your head spin with all the choices. I was just happy I did not have any children in tow-think of what I would have spent!
Note: Minnesota's Largest Candy Store is open seasonally, from July through November, seven days a week from 9 a.m. until 7 p.m. Look for the yellow fencing and barn along Minnesota Highway 169 between Jordan and Belle Plaine, MN.

"The body is like a November birch facing the full moon
And reaching into the cold heavens.
In these trees there is no ambition, no sodden body, no leaves,
Nothing but bare trunks climbing like cold fire!

My last walk in the trees has come. At dawn
I must return to the trapped fields,
To the obedient earth.
The trees shall be reaching all the winter.

It is a joy to walk in the bare woods.
The moonlight is not broken by the heavy leaves.
The leaves are down, and touching the soaked earth,
Giving off the odors that partridges love."
at November 01, 2014 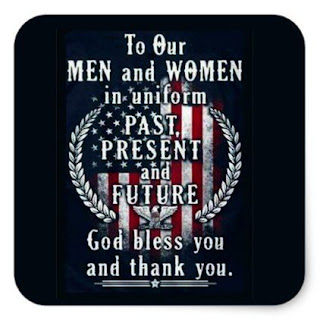