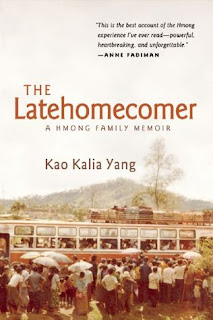 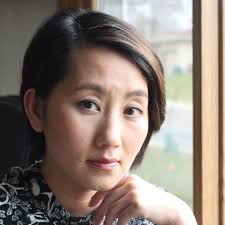 This was a well written and powerful Hmong memoir about Yang and her family's story after spending seven years in Ban Vinai Refugee Camp and their challenges of making a new life in Minnesota and facing discrimination.
Kao Kalia Yang's newest memoir is "The Song Poet". 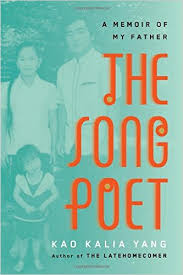 This mesmerizing read is about art, resilience, opportunities and indignities that come with life in a new country. “The Song Poet” is an unusual memoir. The first part of the book the author tells about her father’s Bee Yang‘s life but from his perspective. Her words skillfully paint vivid images of him growing up as a boy in Xieng Khouang Province, Laos, his subsequent escape from Laos, the refugee camp in Thailand, and working as a blue collar worker (factory employee) in St. Paul and raising a family. The second half of the book is Kao Kalia Yang telling her own family’s story as Hmong refugees living in Minnesota.

The author has written this book out of love for her father. The book’s title is a nod to the elder Yang’s talent for Hmong song poetry. A ‘Song Poet’ in Laos is a person who sings songs about his family, his village and his country. Bee Yang, a Hmong refugee living in Minnesota, sings all these songs from memory about his loss, tragedy and love.  In many ways I also found this memoir to be a daughter’s love song for her father.

In 1992, five years after Bee Yang and his family arrived in the states, he released a six-song recording. “They were songs of love, of yearning, of losing home and country,” Kao Kaila Yang writes.
Over time, a fair number of Minnesota’s sizable Hmong population bought the album, and the money Bee Yang earned paid for school supplies for his children. A second album didn’t materialize, and this book "Song Poet" contains some of the stories her father hadn’t widely shared.

Through Bee's stories and Kalia's experiences, the book documents the challenges of the family's assimilation into America over the last 29 years ago. The family has endured bitter cold Minnesota winters, a substandard 900 square foot home for eight people, pursuit of education, isolation, discrimination in the work and school setting, a rich community they've shared living among other Hmong immigrants and the opportunities afforded them living in a new country. The Yang family resilience and determination to succeed is much to be admired.

“The Song Poet” was not a fast read. Often I had to stop and process loss, anguish and humiliation the Yang family has suffered these past 29 years. The immigrant experience certainly is a timely topic in today’s world. This memoir serves as a reminder to treat others with the respect and dignity they deserve, and the need to respond to issues of bullying and racism in schools and in the outside world.