This was one of my favorite issues of 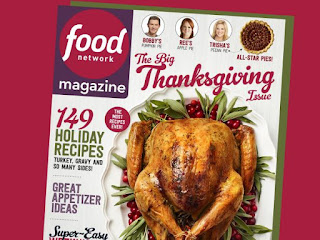 with so many enticing recipes. Bobby Flay's Pumpkin Pie with Bourbon-Maple Whipped Cream and Cinnamon  Crunch caught my immediate interest. I wanted to test it out before Thanksgiving to make sure it would be manageable as we are hosting dinner. The ingredients and directions were 3/4 of a page so my mission was to streamline the recipe. I am aware probably 99.9% of those cooking would be happy enough with a prepared pie crust and using Libby's Pumpkin Pie Filling but I am always up for  challenge. The end result was fantastic and so well worth the effort. Indeed it was a show stopper dessert and I would definitely make it again using my adaptations.

Cook's Notes: Since I made multiple adaptations to get the recipe just right (sorry Bobby) I will include the original recipe link.
http://www.foodnetwork.com/recipes/bobby-flay/bobby-flays-pumpkin-pie-with-cinnamon-crunch-and-bourbon-maple-whipped-cream-recipe-1965538

I will admit there were a few puzzling things about the recipe as I worked through it but I just kept saying to myself it's a Bobby Flay recipe so it must be right.
The recipe called for miscovado sugar. I had never heard of it so looked it up to find a substitute. I used dark  brown sugar.
Muscovado - Another cane sugar, this one has a very moist texture and a strong molasses flavor.
The cinnamon crunch was quite tasty but that part of the recipe was enough for many pies so I bagged the extra up. I found it's perfect as topping for oatmeal and yogurt. 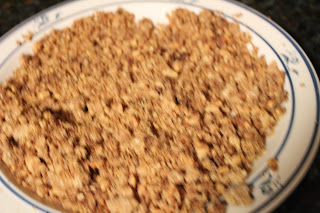 My sister was surprised I even had bourbon for whipped cream.  Only 1-2 teaspoons were  needed but a small airline size bottle from the liquor store come to the rescue for this topping.
Lastly, I would suggest if you are up for this scrumptious pie consider some advance  planning. The crust and cinnamon crunch can both be baked the day before. 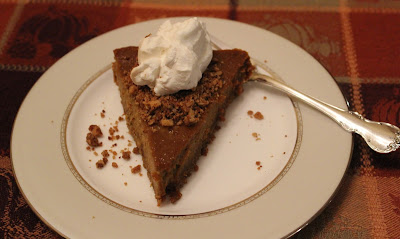