"What you do makes a difference, and you have to decide what
kind of difference you want to make."
Jane Goodall 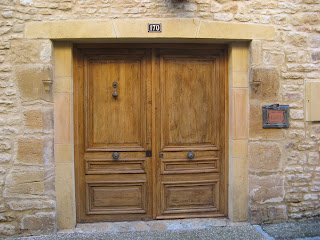 The French consider cooking an art and their cuisine is famous and popular around the world. French cookbooks date back to the Middle Ages and French standards were the early gauge of cooking. Nouvelle cuisine which emerged in the 1960’s was a reaction to the current heavy style of cooking used at that time using rich ingredients. While many of the Nouvelle cuisine dishes were made with expensive ingredients they were much lighter, portions were smaller and the presentation more artistic.

About this time Julia Child emerged as a popular American chef, author and television personality. She brought French cuisine to the American public with her debut cookbook, Mastering the Art of French Cooking. Her subsequent television programs, the most notable of which was the French Chef, premiered in 1963. In the 1970’s and 1980’s she was the star of numerous cooking shows on television and authored several more cookbooks. I do have to make note of Child’s signature use of ingredients butter and cream which had often come under fire by food critics and nutritionists. In a 1990 interview she addressed these critics saying, “Everybody is overreacting. If fear of food continues,it will be the death of gastronomy in the United States. Fortunately, the French don’t suffer from the same hysteria we do. We should enjoy food and have fun. It is one of the simplest and nicest pleasures in life.”
So with that being said let’s move on to the second course

What is the soup of the day?

Clear soups are bouillon and consommé and thick soups vary depending on the thickening agent used like cream, béchamel, starch, flour, rice or grain.

Some of the soups enjoyed in France 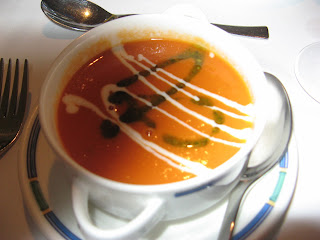 Cook's notes: I was surprised how much I loved this soup since it was the first time I had tried pumpkin soup. It was part of the second course of a home hosted meal in a little town called Tain. I emailed Thomas whose home we were at. He used a real pumpkin cooking it much like a squash. I substituted puree for that ingredient. The soup texture is thick and creamy so it would be served in small bowls or cups. This recipe came in English but the other two recipes requested (chicken dish and lava cakes) came in French!! I am working on getting them translated. If anyone reads French let me know.
French Onion Soup will be posted next.
at November 27, 2012