Back in the Saddle and Head'n West 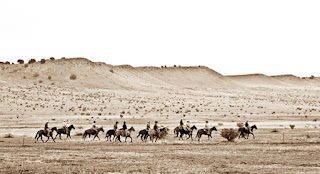 JD March is an adventurer and journalist who has lived in a series of unusual homes, including a haunted 12th century house in Cornwall in Britain and a chalet in the French Alps. But a lifelong passion for the old west means JD is happiest spending time on a proper working ranch, doing jobs that a cowboy would do and camping out on the Big Horn Mountains during fall round up.
JD March is infatuated with the history of the Old West and admires the indomitable spirit and bravery of the people who set out to explore the new lands and spent their lives in untamed wilderness. JD loves the culture of the Indians whose roots are intertwined with nature. They understood their land and were its natural custodians.  The first time author makes us fall in love with the Old West with the book “Dance with the Devil." True West Magazine has chosen JD March as 2015’s Best New Western Author, and JD was a Spur Award Finalist for Best Western Traditional Novel.

Book No.1 "Dance with the Devil" in the series The Devil's Own was reviewed on
http://sockfairies.blogspot.com/2015/05/dance-with-devil.html
Book No. 2 "An Uneasy Alliance" will be available in early fall. 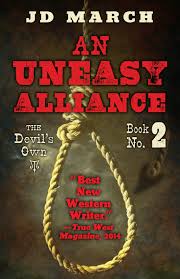 "An Uneasy Alliance" jumps the reader right back into the Sinclair family story and the life of gunfighter Johnny Fierro with an emotional roller coaster ride. Despite Johnny's sordid past his father, Guthrie, embraces his long lost son. Johnny is offered a share of the family ranch in Cimarron, New Mexico along with his half brother Guy. He and Guy each face their own challenges adjusting to the life of ranchers.

Book No. 2 is an important stepping stone in this saga.  As the story continues to develop, action and tension increase with gunfighters who are looking to settle old scores, bushwackers who want to gun him down and prejudice and bigotry encounters with their neighbors. In addition the town is wary of having a gunfighter living amongst them but their actions are hypocritical when they plead for Johnny's help to rid the town of troublemakers. By adding in more emotional scenes the author gives Johnny heart and elicits reader sympathy. Johnny who is always convinced he sold his soul to the devil a long time ago seems incapable at times of recognizing his own good qualities.
Johnny is a conflicted character who often is cynical, introspective and confrontational. He broods over his past transgressions which heavily weigh him down. Readers realize he does have redeeming qualities but often works under a different moral code than most. Johnny seeks justice and will risk his own life to attain it.  Sometimes Johnny fails to realize his biggest supporters are his father Guthrie, his brother Guy and Ben, the town's doctor and a family friend.
Two new characters join the cast of players in the story, Delice and Stoney. Delice is an owner of the local brothel. Johnny meets his match with Delice. She is smart, not easily fooled and keeps Johnny in line. Stoney, a long lost friend, suddenly reappears in town embarking on a new role in the storyline. He is compassionate but certainly doesn't want people to see this quality under his crusty exterior. Along the way Johnny's strained relationship with his father improves when he comes to realize Guthrie is not the enemy but an ally. Guy often finds himself in the role of peacemaker in Book No. 2.

Throughout the story there are several humorous instances as we see Johnny feeling out of his element as he tries to fit in with Sinclair family life. He's not interested in their topics during dinner conversation nor dress code expectations. Johnny often complains to Guy he needs to use regular words because he doesn't understand what he's trying to say .
The stage is set for Book No. 3 with forewarnings that some of Johnny's past is about to be exposed and a cast of new characters are about to join the stage. 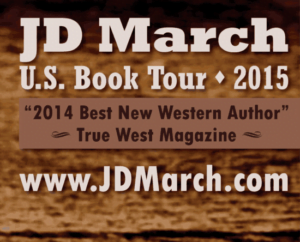