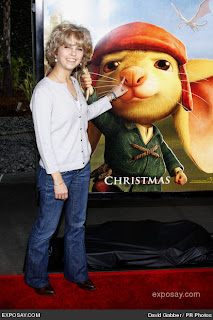 This is a picture of the author at the world premiere of her book Tale of Despereaux. Not only was this book adapted into a movie but previously the book had won the prestigious Newberry  Medal Award.
Today is Kate DiCamillo's birthday. Her impressive prolific list of books begins in 2000 with Because of Winn Dixie, a sweet story about a girl and her dog. This book was a Newberry Honor winner.

I am sure all her fans have their favorite and mine just happens to be The Miraculous Journey of Edward Tulane. No matter how many times I read the book the last two pages bring me to tears. It is a very touching story of Edward, a toy china head rabbit, who begins the story belonging to a young girl named Abilene.  After a series of misfortunes starting being lost at sea, Edward's incredible journey begins with a succession of owners who rescue him and a surprise ending. I was excited to read that this book will be adapted into a film as well as another book of DiCamillo, Magician's Elephant .

DiCamillo spent most of her childhood in Florida. But lucky for us here in Minnesota she came to this area after college. DiCamillo had several part time jobs; working in a book warehouse, a used bookstore and then her writing career took off. Today she is a very successful writer of picture books, middle level chapter books and a recent series of early chapter books on Mercy Watson, the pig.
Be sure to check her work out at the library and local bookstores.
____________________________________________________
Some noteworthy adult books you might think about reading include:
March by Geraldine Brooks
This is a story crafted from a character in Little Women, the absent father. March is a man  who leaves his family behind to aid the Union cause during the Civil War and returns home a haunted man.
Caleb's Crossing by Geraldine Brooks
I consider Brooks a master of historical fiction. Since I really enjoyed her previous book March  I was anxious to read this one.
Brooks had limited information on Caleb, a young man from Martha's Vineyard, who was the first native American to graduate from Harvard in 1665.  She skillfully wove a story of his life using Bethia Mayfield as the narrator. Bethia, a strong female character is ahead of her times in thinking. She is a daughter of a Calvinist minister who finds it hard to accept that girls are denied access to education something she really wants for herself.
She encounters Caleb, a young son of a chiefton near her settlement and forms a friendship with him. The title refers to Caleb crossing from native tribal culture to English white culture. There has been some criticism of the title. Some think the story is more about Bethia crossing from girlhood to womanhood. It is a point well taken but read the story and judge for yourself.
Breaking Night by Liz Murray
This book takes your breath away with the chaos and heartbreaking memoir story of Liz Murray. She is a neglected daughter of two drug addicts who eventually die of Aids. Murray leaves home at 15 and is homeless. At 17 she decides to turn her life around. She enrolls in high school and graduates within two years. Focusing on her parent's bad example (what not to do) she sets her goals even higher and wins a New York Times Scholarship for Needy Students. Murray then goes on to graduate and later forms her own company Manifest Living.  It is an organization that provides a series of workshops that empower adults to create extra ordinary things out of their lives. I was surprised when reading Murray's story that she does not write with self pity nor show anger towards her parents on their lack of parenting. Her determination to turn her life around is quite extraordinary story.
Paper Garden: An Artist Begins Her Life's Work at 72 by Molly Peacock.
This is a true story but it often it reads like historical fiction. The author who is a poet and memorist, tells the story of Mary Delany. She is an 18th century woman who created 985 (scissors cut) botanically accurate representation of flowers after the age of 72. The book is a combination of Mary Delany's life and the author Molly Peacock's life is woven in the story. The authors shows Delany's life to be a work of art. She was an artistic talented woman who showed courage and diligence to improve her family's place in society.  Delany invented paper collage. She called it mosaick. The book is stunning with the photos of these mosaicks.
I was at a book talk awhile back and found out that many of these flower mosaick designs have been copied onto bowls and plates. One of the speakers had some actual dishes to show.  Many of Delany's original mosaick designs are stored in England at the British Museum where they are displayed from time to time. One thing to take away from the book is it is never too late to reinvent yourself :)
at March 25, 2012