A blue moon will grace the night sky Friday night (hope I am not too late), giving skywatchers their last chance to observe this celestial phenomenon for nearly three years.

The moon will wax to its full phase at 9:58 a.m. EDT Friday, bringing August's full moon count to two (the first one occurred Aug. 1). Two full moons won't rise in a single month again until July 2015.
But don't expect tonight's full moon to actually appear blue, unless you're peering through a thick haze of volcanic ash or forest fire smoke. "Blue Moon" is not a reference to the satellite's observed color.
The term has long been used to describe rare or absurd happenings. And farmers once employed it to denote the third full moon in a season — spring, summer, autumn or winter — that has four full moons instead of the usual three. 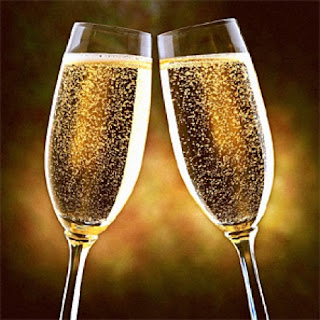 Poetry is the champagne of life
quote by Karen Tolkkinen
Publisher and Editor of Northwoods Woman magazine
So here's a toast to the Blue Moon evening with a little bubbly and some poetic words
Whispers of the Moon
by Kathleen M. Krueger
The moon looks down and collects the tales of the earth.
Poets and storytellers overhear her
as she whispers them as secrets to the stars.
What A Show
by Sue Ready
He pulled out the chair
and whispered in my ear
“Madam, just for you.”

Scanning the night sky
I settled in with ease
anticipating
quite the show.

The curtain opened
and the ball began
a slow ascent
into the eastern sky.

Its vibrant golden hue
illuminated the evening
casting shadows
across the ground.

The crowd murmured
and gasped
for an evening show like this
was well worth the wait.

It was then I knew
the best moon viewing chair
had been saved
just for me.

Full Moon
by Michael Spooner
O,
the big
round moon
is a hole
in the sky,

and
the day
washes through
like the morning tide.

When
the earth
is full
and it's time
for night.

then the day
washes out
to the
other side. 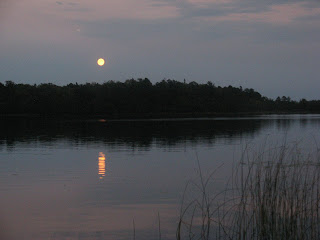 Postscript: The full blue moon did not disappoint me tonight. It was a glorious golden hue as it rose up over the lake. The moon's light was reflected in the water. Now this was the time I wish I owned a better camera to fully capture such a sight. 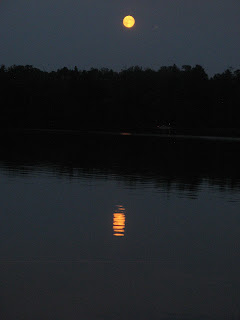 The time period between two pictures was only 15 minutes.