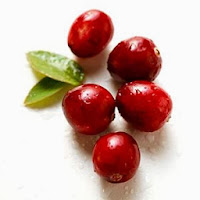 Cranberries are an American native fruit and a favorite seasonal ingredient found in traditional holiday recipes. They were also a Native American staple. The berry helped Indians and colonists survive. Every schoolchild learns that the Pilgrims couldn't have survived life in the New World without the help of the Indians. The tribes taught them which crops to plant. They introduced them to corn and other nutritional mainstays. One of these, the American cranberry, is still part of the classic Thanksgiving feast.
The Algonquin, Chippewa, and Cree, among others, gathered wild cranberries where they could find them in what is now Maine, Massachusetts, New Jersey, and Wisconsin, all the way west to Oregon and Washington, and north to areas of British Columbia and Quebec. The berry was called sassamenesh (by the Algonquin) and ibimi (by the Wampanoag and Lenni-Lenape), which translates literally as "bitter" or "sour berries." Cranberries were used for everything from cooking to dyes for textiles to medicines.
The Native Americans ate cranberries as fresh fruit, dried the fruit and formed them into cakes to store, and made tea out of the leaves. The Inuktitut of eastern Canada used the cranberry leaves as a tobacco substitute. There were also a range of nonculinary uses for the berry. Cree boiled the fruit and used it to dye porcupine quills for clothing and jewelry. Chippewa used cranberries as bait to trap the snowshoe hare.
The nutritional power of the fruit cranberries are extremely high in antioxidants and are thought to help prevent heart disease. Iroquois and Chippewa used cranberries for an assortment of medicinal purposes.

Cranberry Trivia
Follow Ever Ready this week for a Cranberry Blitz 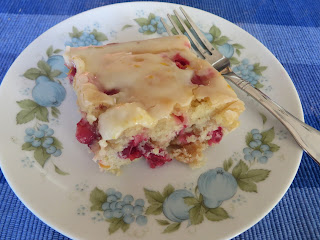 Cranberry Orange Pound Cake
Cook's notes: This moist cake is sure to be a crowd pleaser with bursts of tart cranberries and sweet orange icing. It shines as a brunch side or as a dessert for your holiday gatherings. The original recipe called for it being baked in 2 large loaf pans but I used a 13 x 9 pan. Recipe adapted from chefintraining.com
Cake Ingredients:
Orange Glaze Ingredients:
Cake Directions:
Orange Glaze:
Use a whisk and blend ingredients until smooth.

Fresh cranberries stored in the refrigerator are usually good for up to 2 weeks. It is suggested freezing them if you are not going to use them within two weeks. Cranberries freeze nicely and last up to one year.

So when you need a cranberry fix off season stores buy cranberries buy in bulk when stores run specials. Place each bag in a freezer zip loc bag and store in freezer. 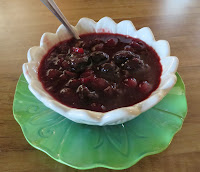 Cook's notes:This sauce is perfect accompaniment for any dinner. It's quite tasty served over turkey, chicken, pork or salmon and as basting sauce for grilled meats. It can be made a few days in advance and kept refrigerated. Don't skip the wine part. For some inexplicable reason it really enhances the sauce flavor :)
Ingredients: