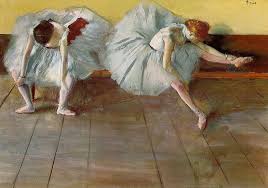 
Degas was a French artist famous for his paintings, sculptures, prints, and drawings. He is especially identified with the subject of dance; more than half of his works depict ballet dancers. Degas is regarded as one of the founders of Impressionism, although he rejected the term, preferring to be called a realist. He was a superb draftsman and particularly masterly in depicting movement, as can be seen in his renditions of dancers, racecourse subjects and female nudes. Degas's portraits are notable for their psychological complexity and for their portrayal of human isolation.
Eve Merriam

Eve Merriam (July 19, 1916,-April 11, 1992) ,was a poet, playwright, director and lecturer. She was a master at using metaphors to craft a poem. These are two of my favorite ones. Each poem gives me food for thought.

Metaphor by Eve Merriam
Morning is
a new sheet of paper
for you to write on.

Whatever you want to say,
all day,
until night
folds it up
and files it away.

The bright words and the dark words
are gone
until dawn
and a new day
to write on.

How To Eat a Poem by Eve Merriam

Don't be polite.
Bite in.
Pick it up with your fingers and lick the juice that

may run down your chin.
It is ready and ripe now, whenever you are.

You do not need a knife or fork or spoon
or plate or napkin or tablecloth.

For there is no core
or stem
or rind
or pit
or seed
or skin
to throw away.
Eve Merriam wrote many poetry books. One poetry book "Inner City Mother Goose" was the basis for the 1971 Broadway musical, Inner City. This is a link to a complete list of the books she has authored.http://www.directtextbook.com/author/eve-merriam
In 1981, she was named the winner of the NCTE Award for Excellence in Poetry for Children. 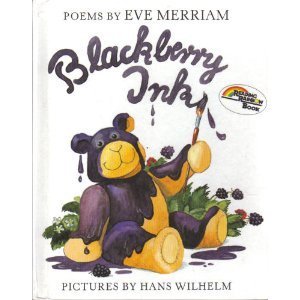 I have enjoyed using Eve Merriam's books in the classroom. "Blackberry Ink" is a fun book for young readers. It is a collection of humorous and nonsense rhymes on various themes. 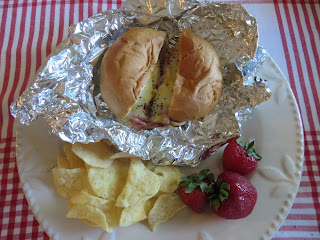 Ham and Swiss Cheese  Sandwiches
Cook's notes: When I was growing up this sandwich was a family favorite. I consider this Ham and Cheese sandwich a pioneer meal for foil packet cooking in the 60's.
Ingredients:
Directions:
Another updated option:Hawaiian Ham and Cheese Sliders 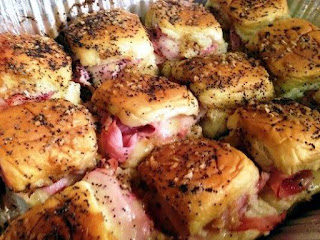 Cook's notes: Easy way to bake 12 sliders at a time minus the foil.