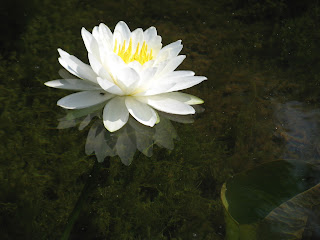 Water Lilies
"I have passed down the river before sunrise on a summer morning, between fields of lilies still shut in sleep; and when, at length, the flakes of sunlight from over the bank fell on the surface of the water, whole fields of white blossoms seemed to flash open before me, as I floated along, like the unfolding of a banner, so sensible is this flower to the influence of the sun's rays."Henry David Thoreau

It is not often one comes across a novel that reads like lyrical prose with its evocative descriptive sketches. The Buddha in the Attic by Julie Otsuka is just that book whose words will remain with you long after the book is finished. It is a follow up to the book When The Emperor Was Divine. What sets this book apart from others is the way it is written. It is narrated from first person plural and told from the POV of a group of Japanese women. A chorus of words "we", "our", "them", "us" tells their stories beginning from the turn of the century as they journey to America by boat. It takes a few pages to get used to the writing style. The narrator allows readers to see multiple perspectives of women who came to California as "picture brides"or mail order brides. As their stories unfold we hear of women who came from many parts of Japan hoping for a better life than what they had left behind. Many of these women felt betrayed and disappointed as they met new husbands who had misrepresented themselves and had little if anything to offer their new bride.
We hear in the story the experiences of women who worked in the fields, in wealthy homes, were business owners, worked in stores and ran restaurants. Many of these Japanese women had husbands who took them for granted. They bore many children who grew up ashamed of their stilted English and foreign habits. The book details the frightening experiences of Japanese living in America up to World War II and then relocation to internment camps.
The last third of the book was quite moving as these women gave painful accounts how they were forced to remove all traces of their ancestry, worry when their husbands name would be on the list and be taken away and forced separation from their children. As reminders of the Japanese were erased from community to community their voices become silent as they disappeared from sight certainly were thought provoking accounts. The book's length of 129 pages is short by some novel standards but the words told a powerful story. 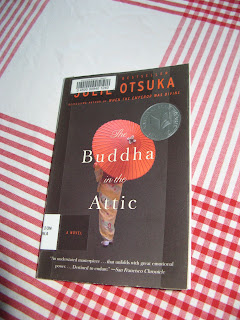