The World According to Bella and A Buttermilk Recipe

"Turn your face toward the sun and the shadows will fall behind you."

J.Kenji Lopez is the Managing Editor of Serious Eats where he likes to explore the science of home cooking in his weekly column The Food Lab. He tested over 10 products on grocery store shelves that were advertised as buttermilk ranch dressing. One of his conclusions was that making a homemade dressing with fresh ingredients was superior in taste over using a prepared bottled dressing.

The three most common herbs found in ranch dressing are dill, parsley, and chives. You can substitute any one of these or all if you'd like. There's no added sweetener in homemade ranch dressing because the recipe calls for store-bought mayonnaise, which already has sugar (or HFCS) in it. This recipe has a small amount of Worcestershire to add savoriness to the dressing.
The following recipe is adapted http://thepioneerwoman.com/cooking/2008/06/homemade-ranch-dressing/

Mince the garlic with a fork into a paste and sprinkle Kosher salt on it. Chop the parsley, chives and any of the optional herbs very finely and add to the garlic.

In a bowl combine all ingredients, adding in other optional ingredients as you wish, tasting frequently and adjusting seasonings as needed. Add ingredients to a jar with a screw top and shake till blended or use a blender.
Chill for a couple of hours covered before serving. 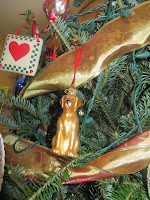 A cool ornament that looked just like me. Mrs. S said I was now immortalized (new word #1) in gold. The day after Christmas was another unexpected gift-a trip to the lake. And did I ever have fun even though my behavior went from very good to very bad. 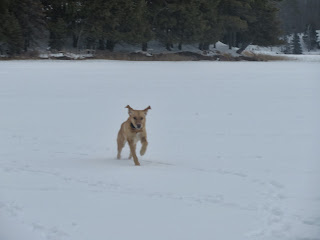 Here I am at full speed sprinting across the lake to catch up to Mr.C who was skiing. We were on our way out to pay a social call to our neighbor Paul at his ice house. When Paul heard I was at the lake he had rushed back to his house to put his fish in a safer spot. Guess he remembered what I did last year. 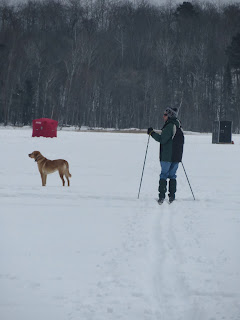 The day went well but that night I got a little crazy. I was supposed to just go outside and "do my business"  but instead I disappeared into the night. I was gone a very long time before I returned with saliva dripping from my mouth and I was licking my chops. I didn't fool Mr. C and Mrs. S one bit. They knew what I had done but didn't have any actual proof.  But the next day my cover was blown.
Again, I was expected to go out and "do my business" but I disappeared for a very long time. This time my behavior was what Mrs. S called brazen (new word #2). I showed up at the door with a fresh piece of deer carcass hanging from my mouth. Mr. C had a hard time getting me to drop it for a trade. His trade was a dumb piece of turkey but  I thought mine was better. Later Mr. C made an unexpected discovery in the fire pit. And I was busted! Just when I thought I was being resourceful (new word #3). I had dragged all these pieces of dead deer carcass to the fire pit. I was stockpiling (new word #4) so I had a supply of food. I thought I was being resourceful foraging (new word #5) and saving Mr. C money on buying dog food.
I was sorry when Mr. C and Mr. S announced it was time to leave for the cities. I was having such a good time.
Love, Bella