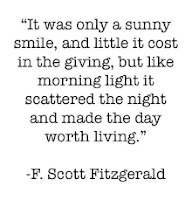 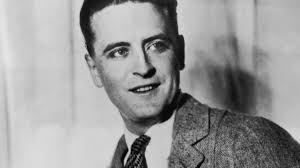 Francis Scott Key Fitzgerald was an American novelist and short story writer, whose works epitomizes the writings of the Jazz Age. He is widely regarded as one of the greatest American writers of the 20th century.
Fitzgerald is considered a member of the "Lost Generation" of the 1920s. He finished four novels: This Side of Paradise, The beautiful and Dammed. The Great Gatsby and Tender is the Night.  A fifth, unfinished novel,The Love of the Last Tycoon, was published posthumously. He died of a heart attack in 1944 before its completion. Fitzgerald also wrote numerous short stories, many of which treat themes of youth and promise, and age and despair.

Born in 1896 in Saint Paul Minnesota, to an upper-middle-class family, Fitzgerald was named after his famous second cousin, three times removed on his father's side, Francis Scott Key, the lawyer and writer who penned the lyrics to “The Star Spangled Banner” during the War of 1812. But he was always known as plain Scott Fitzgerald. He was also named after his deceased sister, Louise Scott Fitzgerald.

The dominant influences on F. Scott Fitzgerald were aspiration, literature, time spent at Princeton, his wife Zelda Sayre Fitzgerald and alcohol.  Fitzgerald was attracted to Zelda who was considered the quintessential 1920s “flapper.” Shortly after the publication of “This Side of Paradise,” he married Zelda Sayre, the daughter of an Alabama judge. Beautiful and unpredictable, Zelda was a major inspiration for the new generation of liberated “flapper” girls Fitzgerald often wrote about in his novels and stories. She smoked and drank in public, cracked risqué jokes and was an accomplished painter, dancer and writer. The couple’s fashionable clothes and booze-fueled antics made them the toast of the literary world.
But their glamorous lives were later visited by tragedy in the 1930s. Fitzgerald sank into alcoholism and struggled to write, and Zelda suffered a mental breakdown and spent the latter part of her life in and out of sanitariums. They had one daughter named Scottie.

Following Fitzgerald's footsteps began in St. Paul, Minnesota where our group of 10 gathered downtown in Rice Park to have our photo taken beside his bronze statue. This life size replica was created by Minnesota sculptor, Michael Price. 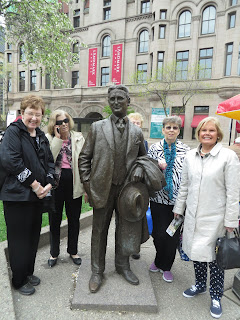 Kathleen loves literature, fine quotes, and the history of St. Paul. What better way to celebrate her birthday than to walk in Fitzgerald's shoes on a brisk and I might add windy Spring afternoon. 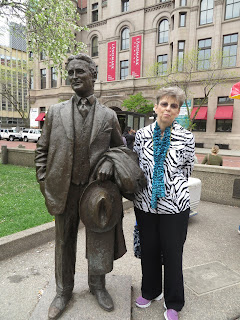 Courtesy of The Fitzgerald Society we all had our brochures A Guide to F. Scott Fitzgerald's St, Paul's Homes and Haunts to keep us on track with three designated car drivers. Due to time constraints we had to skip other downtown locations which included the St. Paul Hotel, where Scott and Zelda spent time in between homes,Union Depot, where Scott would catch the train to go out East for schools (In the "Great Gatsby" he described coming back to St, Paul on the train), and St. Mary's Church, where Fitzgerald's grandparents worshipped  and donated a marble baptismal font, and  The Fitzgerald Theater. This theater is committed to programming that reflects the audience and mission of Minnesota Public Radio and is home to Garrison Keillor's, A Prairie Home Companion. The Fitzgerald Theater is St. Paul’s oldest theater, built in 1910. 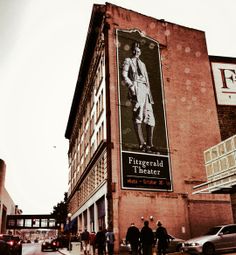 From downtown we headed up to the Summit Hill-Cathedral Hill District where well-preserved Victorian-era dwellings and other historic architectural treasures are located throughout this nationally famous area of St. Paul, Summit Avenue. 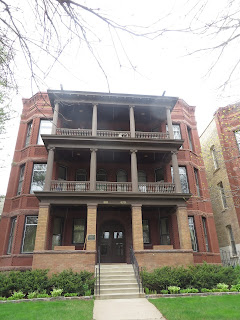 F. Scott Fitzgerald was born on September 24, 1896 in his parents’ apartment at 481 Laurel Avenue. The three-story apartment building is located in Saint Paul’s Ramsey Hill neighborhood. Today, the building is a National Literary Landmark and on the National Register of Historic Places. 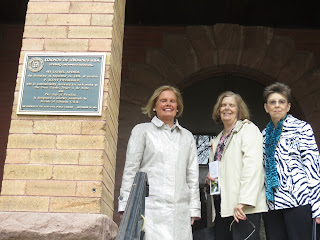 Driving past the stately Victorian mansions on Summit Avenue of railroad barons James J. Hill and his son Louis W. Hill's home,  we stopped at a more modest property at 599 Summit avenue. It was here Scott published his first novel "This Side of Paradise" and a number of short stories, including A Camel's Back. 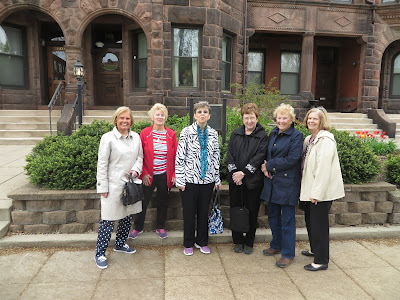 626 Goodrich Avenue is where Scott and Zelda briefly lived after the birth of their first and only child Frances (Scottie) Fitzgerald in Oct 1921. 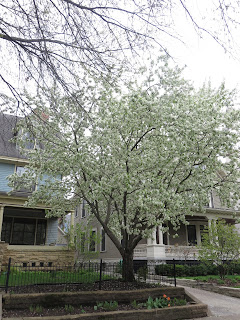 It's the yellow Victorian house on the right almost hidden by spring foliage. 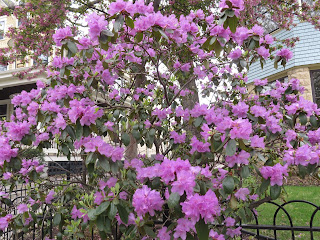 An added bonus to the trip was finding the old St. Paul Academy building where Fitzgerald went for three years. In 1909, at age 13, Scott won his first byline with the publication of a short story in the school magazine. Now a professional building, the young Fitzgerald is immortalized by a bronze statue on the stairs holding his school books. 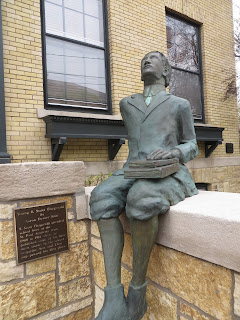 The Commodore Hotel opened in 1920. Evicted from their White Bear Lake cottage, Scott and Zelda moved into the luxurious Commodore Hotel, awaiting the birth of their first child. A speakeasy was said to have operated in the basement of the Hotel.
The hotel and its elegant art deco bar attracted literary figures F. Scott and Zelda Fitzgerald, as well as gangsters Al Capone and Fred Barker. The hotel was renovated in the 1970s but the outside still looks much like it did when Ma Barker met her son Fred's girlfriend here. It recently reopened in Oct 2015 with another stunning renovation inside maintaining an art deco influence. 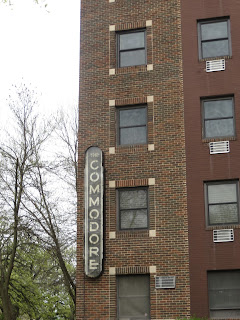 It was here we had a chance to toast the birthday girl with the Commodore's signature drinks: The Fitzgerald, The Zelda and The Dorothy Parker. 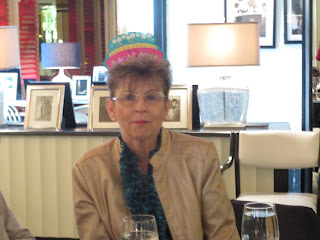 Our second to last stop was 420 Summit Avenue-The University Club, a place where Scott and Zelda once held a "Bad Luck Ball" in 1922. The University Club figures in several of Fitzgerald's stories, including The Ice Palace. 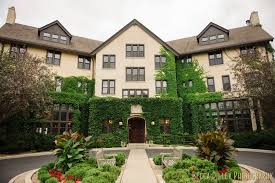 We enjoyed a lovely dinner overlooking the city of St. Paul. 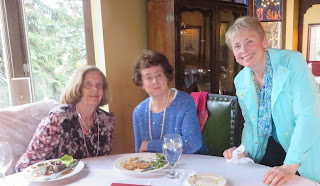 A birthday would not be complete without a birthday cake. Our last stop was Kathleen's house to cap a very fun day walking in Fitzgerald's shoes. And I might add tracing the footsteps of Fitzgerald inspired all of us to reread his classic books and short stories. Many in the group did their homework, were well informed and came with their favorite quotes. 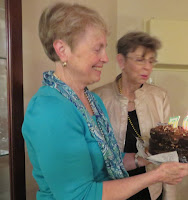 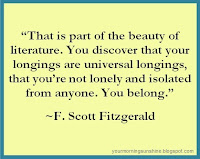