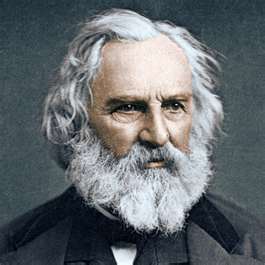 February 27, 1807-March 24, 1882
Listen my children and you shall hear
Of the midnight ride of Paul Revere
On the eighteenth of April in seventy five
Hardly a man is now alive
Who remembers that famous day and year.
First verse from Paul Revere's Ride written by Henry Wadsworth Longfellow
Longfellow became the first American poet inducted into the poet's corner in Westminster Abbey, London, England. He is known for his long narrative lyrical poems such as The Song of Hiawatha and Paul Revere's Ride. He also created verse that became popular for children to recite such as The Village Blacksmith.
It is interesting to note that while he had a lot of literary successes Longfellow suffered many personal losses. His first wife died in miscarriage. His second wife whom he courted for 7 years bore him 6 children. One day while using a candle and sealing wax her dress caught fire. She died several days later due to extensive burns. Longfellow in trying to save his wife suffered extensive permanent facial injuries. Thus when you see pictures of him he is always bearded.
The Cambridge Bridge was renamed Longfellow Bridge in 1927 in honor of Longfellow who wrote about this bridge in the poem The Bridge in 1845. It spans the Charles River connecting Cambridge to Boston. Locals refer to it as the Salt and Pepper Bridge due to the shape of the central towers. 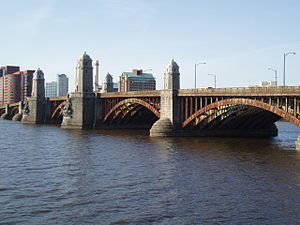