"Some people believe holding on and hanging in there are signs
of great strength. However, there are times when it takes much
more strength to know when to let go and then do it."
by  Ann Landers
On The Move
Today I just about had it watching those cats across the street. Taunting me and strutting themselves in their front yard. Well I finally got a lucky break. Mr. C was a bit slow and not too alert shutting the gate-here was my chance. I flew off the deck and across the street in the blink of an eye. Boy, did I scare those cats as they scurried away. I have never seen a cat move so fast. Then I spent a bit of time scouring the yard trying to find their hiding place.  Meanwhile across the street Mr. C is yelling all sorts of commands which I chose to ignore. Finally when I could see I was out of luck I returned back. But now I was in the dog house for being a bad dog. I was threatened with not going on an upcoming field trip. In the end they warned me repeatedly about good behavior expectations and I was allowed in the van.
I had high hopes for this trip. I heard about 60 miles of beaches the length of the North Padre Island. I remembered all the fun I had last year running free on the Florida beaches.
I settled into my seat with a great window view of  the ship channel. This was on my first ferry boat ride ever . And I didn't even have to leave the comfort of the van. After many miles of riding my excitement turned to disappointment. Signs posted everywhere meant I had to be leashed. Which meant now I could not freely sample any of seafood buffet on the beach nor chase the seagulls. What a bummer!
But check out my photo. Hey, how many dogs get their picture taken on the beach. Leash or no leash I had fun! 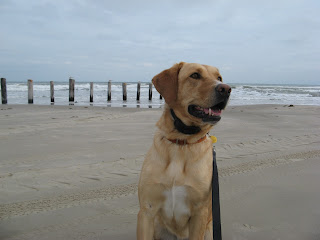 
Scrambled Egg Sliders-Southwestern style
Adapted from Southern Living January 2012
Cook’s note: This is such an unusual recipe that caught my attention and it really works. And it just might be a recipe to try for your next brunch. There are all sorts of possibilities with this recipe using different meats and cheeses. Only tricky part is having the scrambled eggs done to coordinate with warm muffins. But can be done :)
I tried the pepper Jack cheese with diced ham. It was quite good and an easy meal prepared in about 30 minutes.
Serves 4
Ingredients:
Directions: