What if you wanted to make the apple cake (posted on September 12th) but did not have enough vegetable oil. Could you substitute olive oil?
Good question for  http://www.ask.com/web?q=can+olive+oil+be+substituted+for+vegetable+oil+&search=&qsrc=364&o=0&l=dir
so I found the answer is YES! provided it is extra light olive oil. Some reviewers cautioned  the taste could be altered but I found it was just fine and did not detract from the over all cake flavor. And I was so close just needed 1/2 cup more :) This time when I made the recipe I used a 13 x 9 pan and I must say the frosting is just what makes the whole cake.
ask.com never fails to answer my questions-a good reference source

After the blog was posted on Wednesday a friend commented that she had same Betty Crocker Cookbook Dinner for Two. She did say her copy appeared to be in better shape than mine. Noted that the penuche frosting is on page 62. 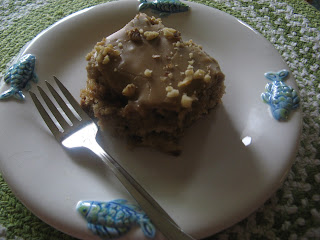 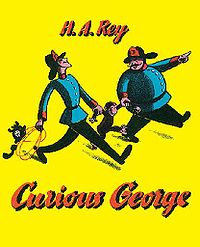 Today is the birthday of the creator of Curious George, H.A. Rey, born Hans Augusto Reyersbach in Hamburg, Germany (1898). As a kid, he spent a lot of time at the zoo, drawing the animals. In 1939, he and his wife, Margret, both German Jews, were living in Paris when World War II began. They were at work on a new book featuring one of Hans' animal drawings: a mischievous monkey named Fifi. "It seems ridiculous to be thinking about children's books," Rey wrote to a friend. "[But] life goes on, the editors edit, the artists draw, even during wartime." By June 1940, the Nazi invasion was imminent, so Hans built two bicycles out of spare parts, and the Reys gathered whatever they could carry, including the collection of monkey sketches for the book manuscript. They fled Paris two days before the Nazis invaded, and rode 75 miles in three days, which turned into a four-month journey that took them to Lisbon, then Rio de Janeiro, and finally New York.
The first book, Curious George, as the monkey was now called, was published in the United States in 1941. George went on to become an international sensation. Margret Rey explained the little monkey's success this way: "George can do what kids can't do. He can paint a room from the inside. He can hang from a kite in the sky. He can let the animals out of their pens on the farm. He can do all these naughty things that kids would like to do." H.A. Rey's explanation was even simpler: "I know what I liked as a child, and I don't do any book that I, as a child, wouldn't have liked."
Rey was also an astronomy buff, and besides the Curious George books, he wrote The Stars: A New Way to See Them in 1952. The book includes constellation diagrams with cartoon outlines to make them easier to remember and recognize. His new diagrams were widely adopted by other astronomical texts, and the book is reissued from time to time as we learn more accurate information about our galaxy.

My favorite Curious George book is Curious George Goes to the Hospital. The story line is that George eats a puzzle piece thinking it is candy. The Man in the Yellow Hat rushes him to the hospital. When they get to the hospital it details all the things a child might encounter. Towards the end of the book some excitement occurs when George commandeers a go-cart and crashes it into a dining cart. This book was written in 1966 so many of the things talked about in the hospital have changed in terms of technology but still a fun story to share with a child who might be making a hospital visit.

Do you have a favorite Curious George book?