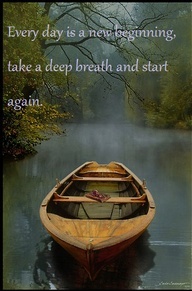 John Anthony Ciardi (June 24, 1916 – March 30, 1986) was an American poet, translator, and etymologist. While primarily known as a poet, he also translated Dante's Divine Comedy, wrote several volumes of children's poetry, pursued etymology, contributed to the Saturday Review as a columnist and long-time poetry editor, and directed the Bread Loaf Writers' Conference in Vermont.
In 1959, Ciardi published a book on how to read, write, and teach poetry "How Does a Poem Mean?" which has proven to be among one of the most used books of its kind in high school and in college.
At the peak of his popularity in the early 1960s, Ciardi also had a network television program on CBS. Ciardi's impact on poetry is perhaps best measured through the younger poets whom he influenced as a teacher.
Ciardi rote volumes of poems for children and adults. "The River is a Piece of Sky" is from his first book of poems for children The Reason for the Pelican published in 1959.


The River Is a Piece of Sky
by John Ciardi

And then you can see
It's a river again.

The difference you'll see
When you drop a penny:
The river has splashes,
The sky hasn't any. 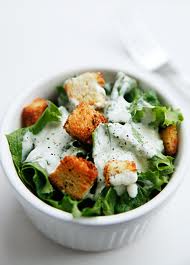 
Directions:
Whisk together, cover and chill at least 2 hours-whisk before serving

This dressing works great as a side using cold cooked potatoes. 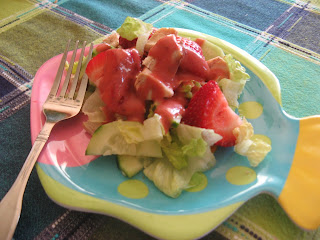 .
This salad was made with romaine, chopped pieces of chicken, green onion, sliced cucumbers and strawberries. The dressing was drizzled over the top.  It's a light refreshing salad for summer.