I saw this poster on Pinterest and felt it fitting since on this day in 1492, the Italian explorer Christopher Columbus reached the New World.  One of his sailors on the Pinta sighted land, an island in the Bahamas after 10 weeks of sailing from Palos Spain. The Santa Maria and Nina were also sailing with this expedition. Columbus was sure he had reached East Asia. Legend has it that Columbus thought the world was round. Columbus was obsessed with finding a western sea route, but he miscalculated the world's size. Columbus led a total of four expeditions to the New World during his lifetime. And over the next century, his discovery made Spain the wealthiest and most powerful nation on the earth. 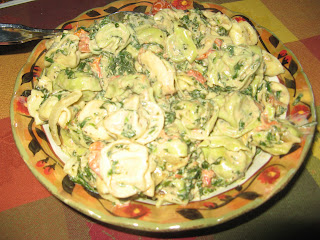 Creamy Spinach and Tortellini
Recipe adapted from Jeanine Alfano Pillsbury Bake-Off book
Cook’s note: There is a spice product called Basil, Garlic and Pine Nut Pesto from Lesley Elizabeth Inc. It is a dried pesto mixture made up of garlic, basil, pine nuts, parsley, salt and black pepper. I added 2 TB. to this entrée. This is the website if you are interested in seeing the product. It is under spices.
http://www.lesleyelizabeth.com/index.php?categoryid=13&productid=37
Serves 6-8
Ingredients:
Directions: