Meet Some Authors and Presenters at the Tucson 2015 Book Festival 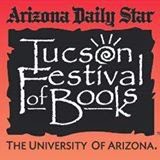 This was more than a book festival as Tucson celebrated books and literacy at one of the largest book festivals in the U.S. This two-day event featured nearly 400 authors participating in 320 presentations at 36 venues as well as countless opportunities to meet authors, poets, screenwriters, and journalists. There were book signings, panel discussions, staged entertainment, food vendors, children's and Science City programming, and dozens of free activities for all ages on the University of Arizona Mall.
It was even more than I imagined and two days was not enough time to cover it all. Choices had to be made with second and third ones waiting in the the wings if lines were too long. The venue for Mitch Albom,  author of "Tuesdays with Morrie'' was 600 people. Mitch Albom is an American best-selling author, journalist, screenwriter, dramatist, radio and television broadcaster, and musician. His books have sold over 35 million copies worldwide.
Let me tell you I barely squeaked in getting a seat in the last back row.  Quite a crowd! I was impressed at how humble Albom seemed discussing his literary career. You might be surprised to learn that Albom has become quite a philanthropist the past decade establishing several charities.  After the hurricane in Haiti he organized a team of people to go there to open an orphanage, school and deliver medical supplies. Albom continues to make monthly trips to Haiti to overseer the operations. He feels the best way to continue Morrie Schwartz's legacy is by the example he sets in his own life.
I quote from page 43 "Tuesdays with Morrie." 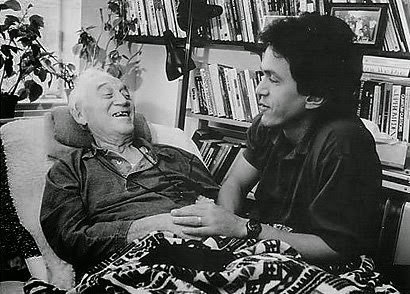 “So many people walk around with a meaningless life. They seem half-asleep, even when they’re busy doing things they think are important. This is because they’re chasing the wrong things. The way you get meaning into your life is to devote yourself to loving others, devote yourself to your community around you, and devote yourself to creating something that gives you purpose and meaning.”

Mitch Albom has a new book coming out in November based on the magic of music drawing on his personal experiences of playing in a band.
Later in the day I made sure I allowed plenty of time in case there was another long line to hear three very famous children's authors talk about their memoir books. I had just finished Katherine Patterson's new book "Stories of my Life" and was quite excited to see her in person.
"Stories of My Life" are Patterson's personal stories that have inspired her children's books
starting with her childhood life in China with her missionary parents, to living as a single woman in Japan, to raising four children in suburban Maryland with her minister husband. Her stories are candid and rich with humor. 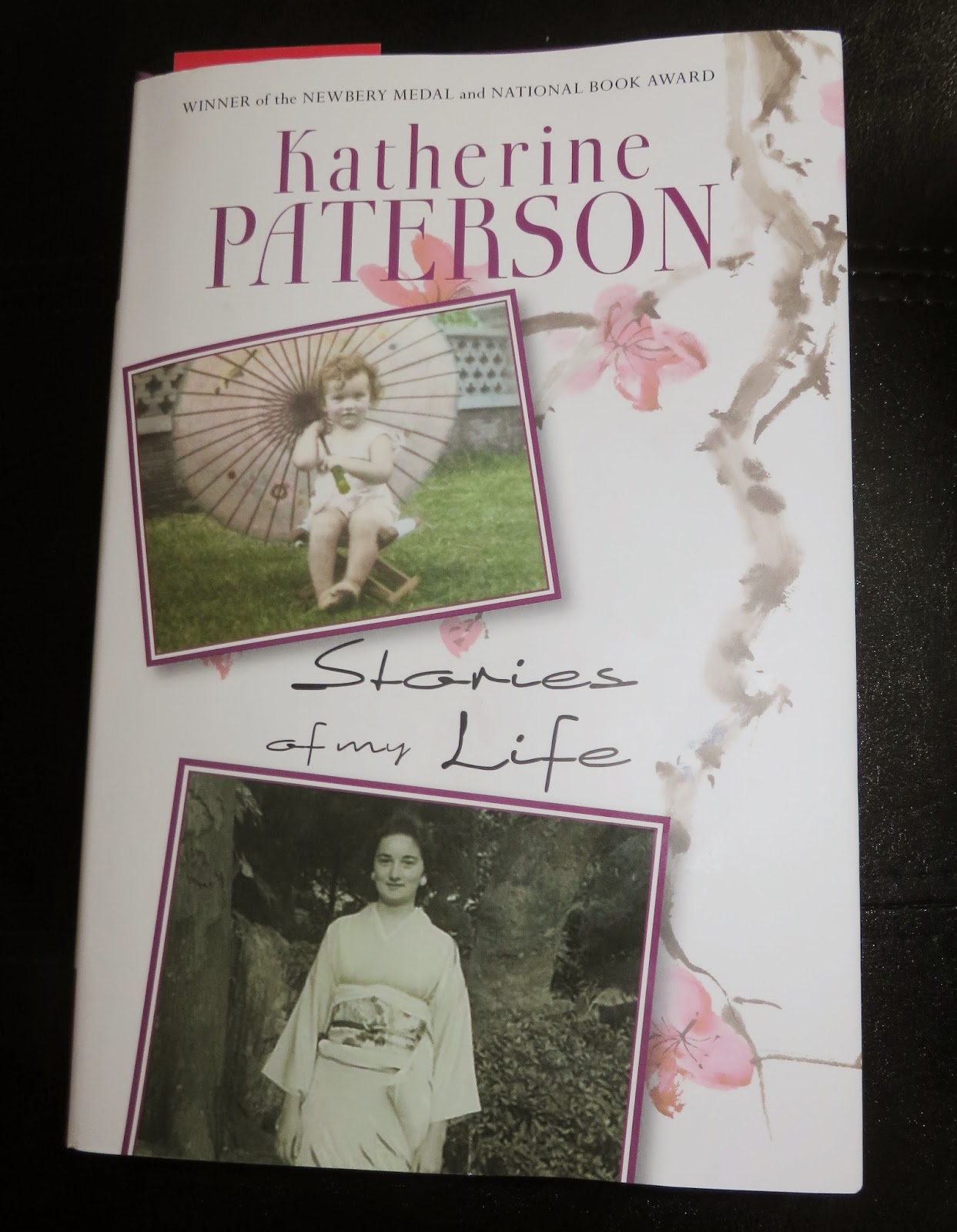 Just check this resume. She is an author best known for children's novels. Four different books published 1975-1980, won two Newbery Medals and two National Book Awards. She is one of three people to win the two major international awards: for "lasting contribution to children's literature" she won the biennial Hans Christian Anderson Award for Writing in 1998. For her career contribution to "children's and young adult literature in the broadest sense", she won the Astrid Lindgren Memorial from the Swedish Arts Council in 2006, the biggest prize in children's literature. She was awarded the 2007 NSK Neustadt Prize for Children's Literature. She was the second U.S. National Ambassador for Young People's Literature, 2010–2011,and she received the Laura Ingalls Wilder medal in 2013. Her most popular book is "Bridge to Terabithia". She has written 30 books in 40 years. 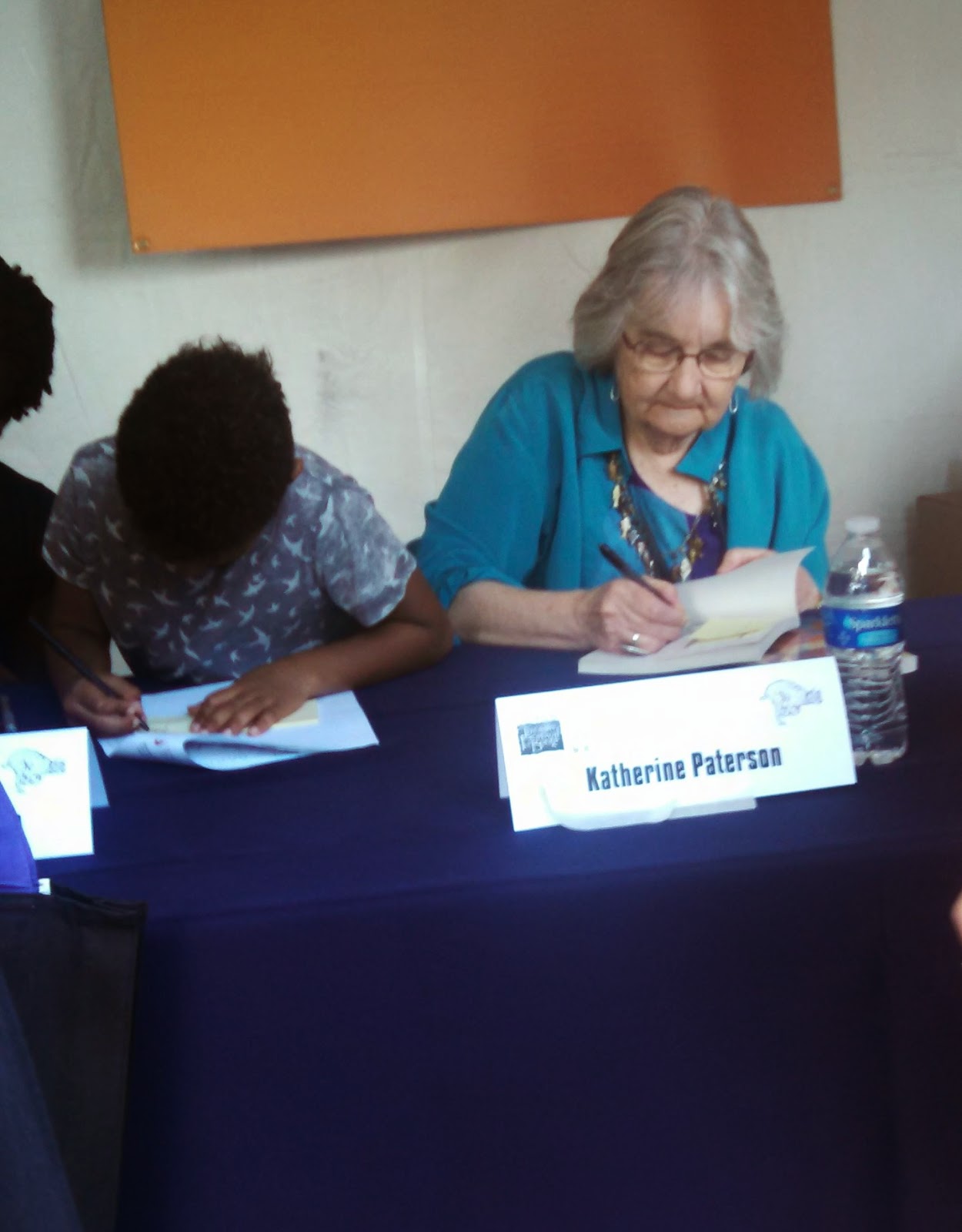 In this photo Katherine Patterson is signing books. Next to her is Jacqueline Woodson and her son Jackson. While Woodson signed books her son signed post it notes to put on the cover of the books. It was quite cute. 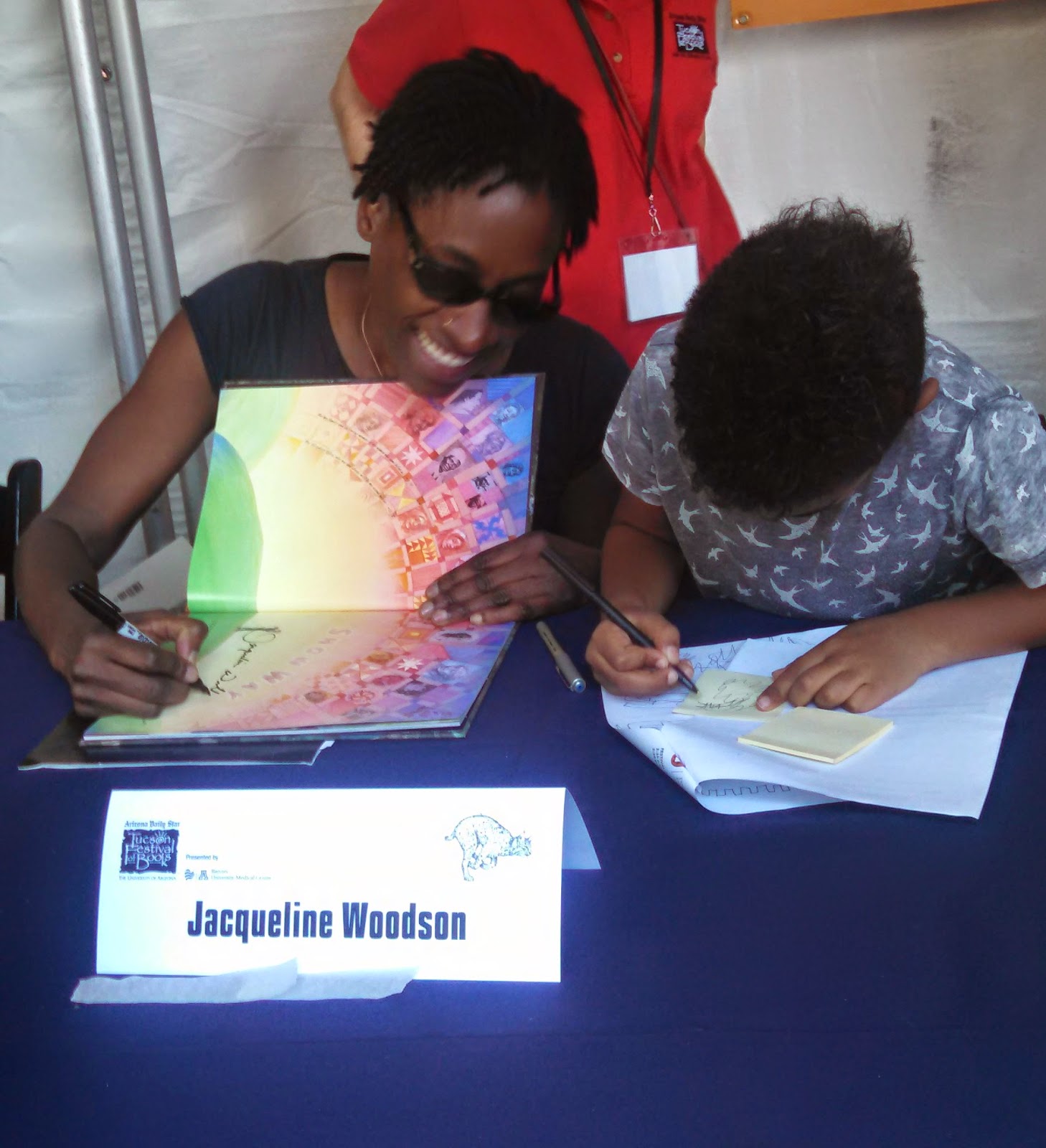 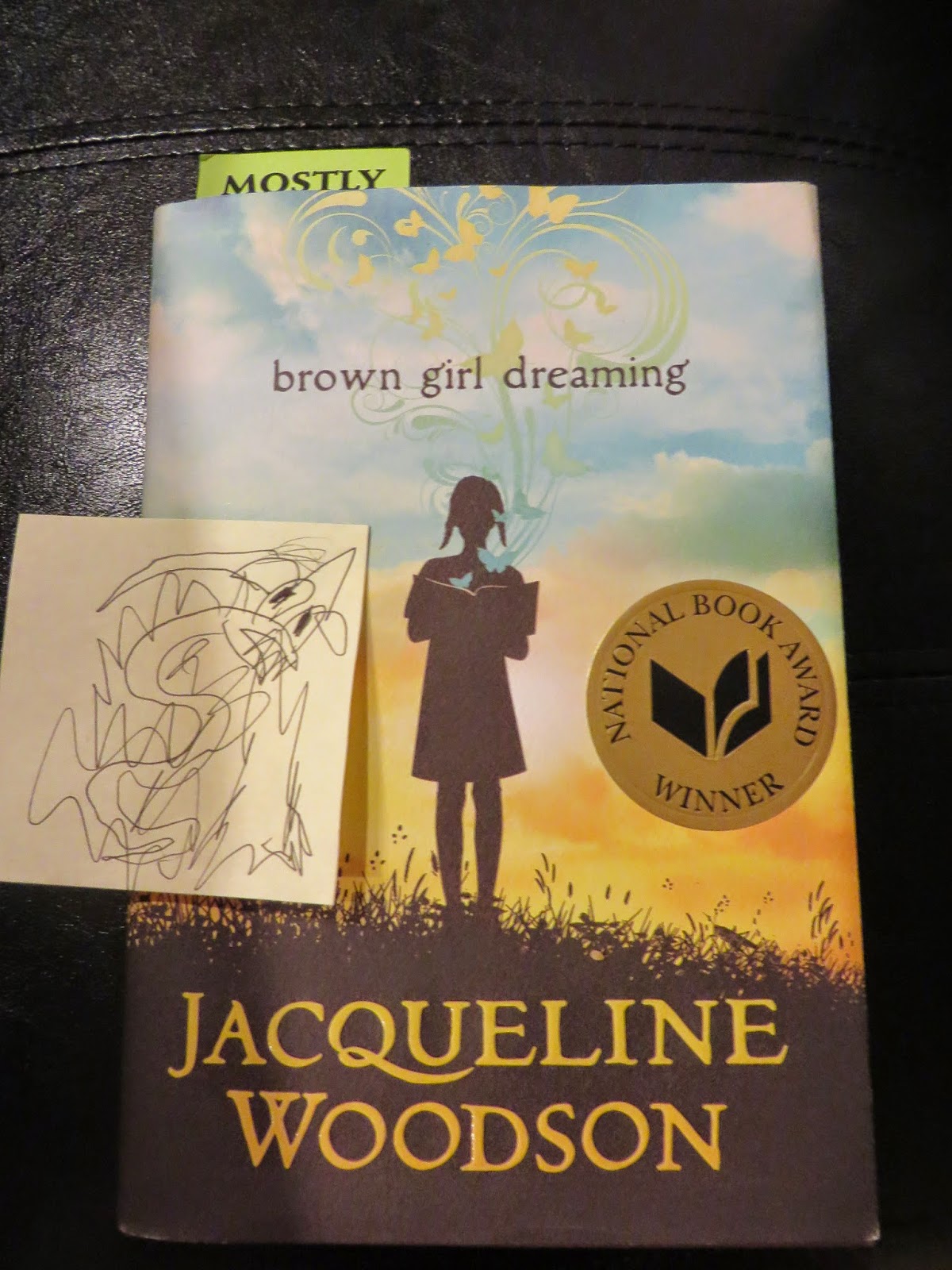 Jacqueline Woodson was the recent recipient of Newberry Honor Book Award for "brown girl dreaming".  It is a memoir-in-verse that makes the readers feel they are experiencing the author’s childhood right along with her. Most notably of all, perhaps, we trace her development as a rising writer, from her early love of stories through her struggles to learn to read through the thrill of her first blank composition book to her realization that ‘words are her brilliance.’ The poetry here sings: specific, lyrical, and full of imagery.
Jacqueline Woodson's awards include 3 Newbery Honors, a Coretta Scott King Award and 3 Coretta Scott King Honors, 2 National Book Awards, a Margaret A. Edwards Award and an ALAN Award -- both for Lifetime Achievement in YA Literature. She is the author of more than 2 dozen books for children and young adults. She lives with her family in Brooklyn and they were in the audience that day to cheer her on.

Marilyn Nelson is the author or translator of fifteen poetry books, including The Fields Of Praise: New And Selected Poems,which won the 1998 Poets' Prize, Carver: A Life In Poems, which won the 2001 Boston Globe/Hornbook Award and the Flora Stieglitz Straus Award, and Fortune’s Bones,which was a Coretta Scott King Honor Book and won the Lion and the Unicorn Award for Excellence in North American Poetry. In 2013 she published a memoir, "how i discovered poetry". She was the Poet Laureate of the State of Connecticut from 2001-2006.

Marilyn Nelson's memoir :"how i discovered poetry" is about her growing up years in the 1950's. It spans 10 years telling the story from Nelson's point of view as an artist and young woman through fifty eye-opening poems. Readers are given an intimate portrait of her growing up years and artistic inspiration along with a larger view of the world around her: racial tensions, the Cold War era, and the first stirrings of the feminist movement. 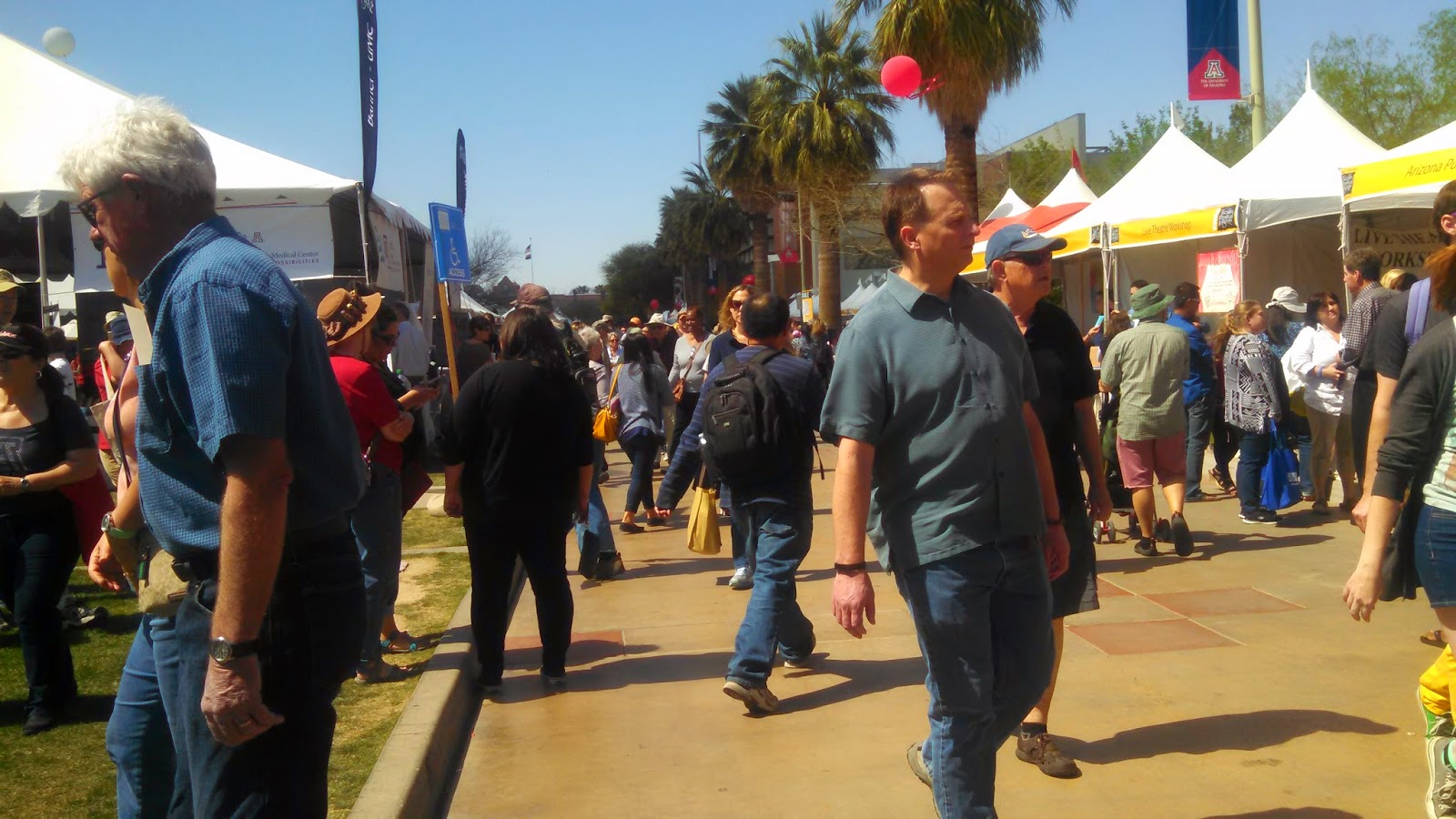 There were plenty of booths outside to meet authors, buy books and learn about different literary societies with representatives to answer questions. Remember the posting on March 12 when I told you about meeting up with two Minnesota ladies from Up North? Krista Soukup, a literary publicist agent and book marketing consultant, was part of a panel with David  Sterry and Lisa Dietlin. It was an informative session as each shared their expertise on marketing tips with strategies to market books in a crowded publishing world.

Candace Simar and her husband Keith are pictured below holding her recent book of poems and prose "Farm Girls" co-authored with her sister Angela.  Candace is a member of Western Writers of America so I met her at their booth. Thanks to Candace my eyes have been opened up to a whole new world of writing and cooking from the Wild West in the late 1800's.   Check back for the next posting to learn more about frontier fare and meet author Sherry Monahan. 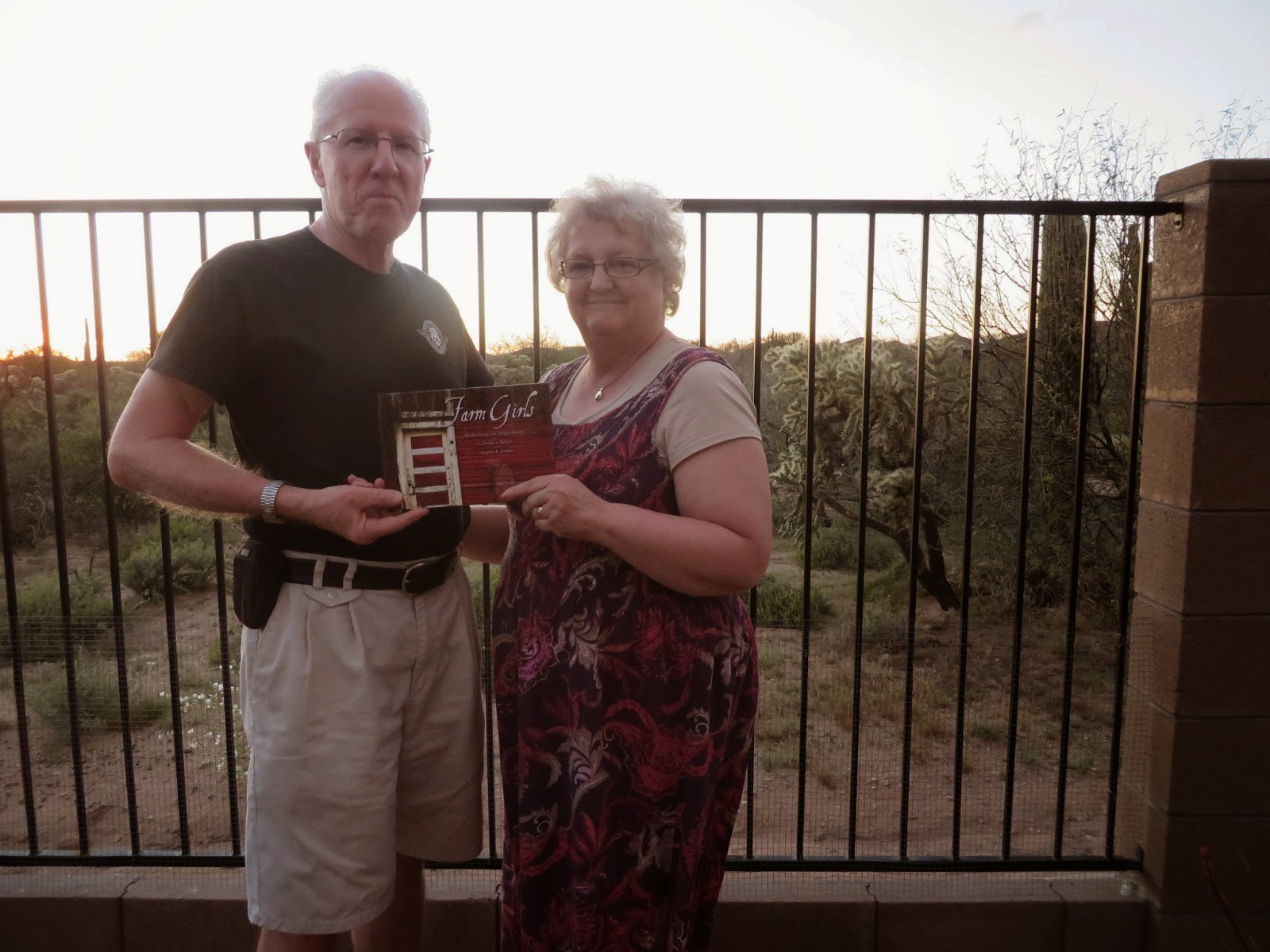