Paul Fleischman and a Garden Salad 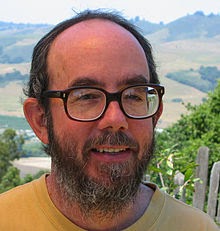 In Paul's words..."I grew up in a house built of voices."

Paul Fleischman (September 5, 1952) is an American writer of children's books. For his contribution as a children's writer he was one of five finalists for the biennial, international Hans Christian Award in 2012. Fleischman grew up in Santa Monica, California. He has fond memories listening to his father, Sid Fleischman, read his books aloud chapter by chapter, as they were written and listening to the radio with his mother.

Both Paul and his father have won the Newbery Medal. Sid Fleischman for The Whipping Boy in 1987, and Paul for Joyful Noise: Poems for Two Voices in 1989.
Fleischman's first books were written while he was still in college, inspired by his reading of folklore. His musical interests are reflected in his collections of poems for two and four speakers, so-called chamber music for speaking voices.
Multiple points of view have been a hallmark of his fiction, beginning with Bull Run (1993), the first of the many multiple-viewpoint novels to be published for children. This format was further explored in Seedfolks.

Seedfolks is a quick read, a short novel told from the viewpoint of 13 different residents of an inner city Cleveland, Ohio, neighborhood. The vacant lot had been a nuisance for years, a place for garbage to be thrown out of windows, for drug deals and rats. It is a thoroughly awful place. But one day in very early spring, a young Vietnamese girl, in memory of her father, plants six bean seeds in the lot, next to the abandoned refrigerator, out of sight. Neighbors notice her activity and wonder. And from that curiosity emerges a glimmer of hope, and a community garden is born. I used this book in the classroom but even my book group enjoyed it. We had a lively discussion.

A lovely novella, this story has sparked the creation of many community gardens and much discussion about diversity and community-building. This little book takes a positive look at what is possible in your own community.

Cook's notes: With that being said think about serving this healthy salad that uses garden or farmer's market produce.

Mediterranean Quinoa Salad
A Mediterranean inspired quinoa salad with juicy tomatoes and cucumbers along with tangy red onions and salty kalamata olives and feta.
Cook the quinoa a day ahead to save time.
Options: Add other Mediterranean inspired ingredients like roasted red peppers, sun dried tomatoes, artichoke hearts or even avocados.
recipe adapted from closetcooking.com and wanderlustkitchen.com
Ingredients