A field trip with the local Green Valley camera club led me on an unusual excursion to downtown Tucson to explore public art.

Funded through the Percent for Art public art program, which allocates 1% of all major capital improvement projects to the creation of public art, the Sun Link public art project injects new life into downtown Tucson. Specifically commissioned for the streetcar line, they are displayed at 11 of the streetcar’s 22 stops. Many of the artists chosen for the project are Arizona natives from Tucson, Bisbee and Surprise. Others hail from Colorado, New Mexico and California. Artists were selected by a panel of Tucson residents and artists, as well as streetcar designers and representatives from the City of Tucson and Regional Transportation Authority. This streetcar project has created an economic surge of building growth along the route.

Sun Link streetcar runs 3.9 miles with 23 stops that serve the University of Arizona, Main Gate Square, 4th Avenue, Downtown Tucson and Mercado District. It opened July 25, 2014. Along the way there are 11 commissioned pieces of public art.  In addition, the University of Arizona Poetry Center contributed poetry to the project. The poems are displayed on LED “poetry boards” at another 10 stops along the line – LED light boards that display poetry alongside transit information for riders. So we rode the streetcar and made all the stops.

While each piece is unique and thought provoking , the unifying theme of “flow” is reflected throughout the streetcar route. Project lead artists Simon Donovan and Ben Olmstead allowed the chosen artists to decide for themselves how to interpret “flow” and how the concept would manifest itself. For some, inspiration came from the ebb and flow of nature, for others it was about history, the movement of words, or the motion of water. Each piece captures the eye in an interesting way and provokes the imagination. 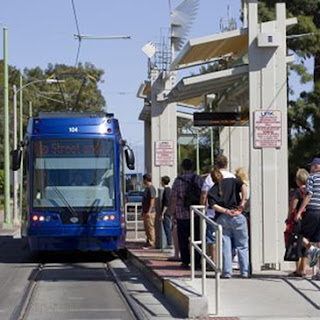 As you can see from the above photo it's a tight setting to squeeze in art at a streetcar stop.  Most of the pieces were suspended. Imagine a six-foot tall head that glows blue in the night, spewing jumbled thoughts on to the sidewalk below. “Poet” by Donovan and Olmstead was inspired by the Poetry Center and resides at the stop nearest to this U of A landmark. It was one of my favorites. During the day its looks like this photo below. 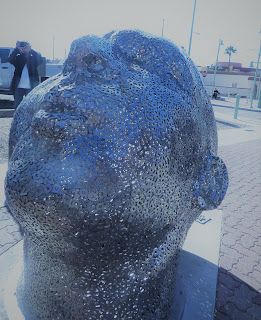 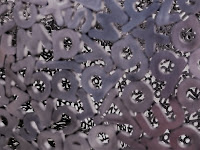 This metal sculpture is comprised of letters shaped like refrigerator magnets.  Above his head is a plaque where the letters spewed out and on the other side a plaque with a poem. 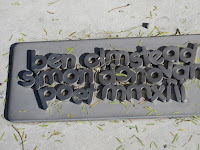 This piece below is titled Wandering Star. It revolves around columns that break off at the top like stars swirling in the sky above. It is an interactive piece and at night it is illuminated. When pressed, buttons on each column change the colors of the stars above. 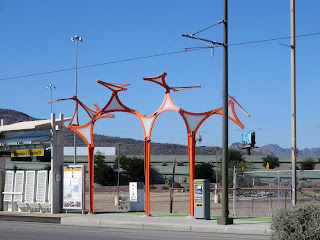 The Gutierrez Bridge was the most intricate, thought provoking piece made up of many elements. It was constructed over the Santa Cruz River. On each side of the bridge is a  sidewalk. Embedded in concrete are different images with accompanying quote/text that depicts a specific and historical happening in Tucson with a date and time of the event. 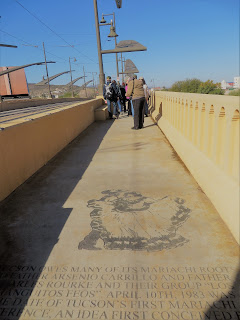 Suspended above the bridge are solar icons that were laser-cut into shade canopies above the sidewalks- 12 to be exact, so that when the sun hits at certain times, the images projected are meant to perfectly align with the sun on those specific times and dates embedded in concrete. So lets say the event happened Oct 23 at 9:30 supposedly if you return on that date and time the sun will hit on the sidewalk where that same date and time is written. Talk about major engineering and serious precision. 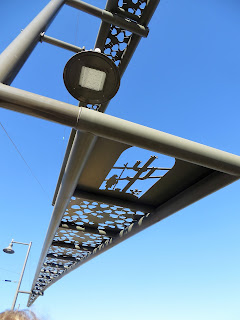 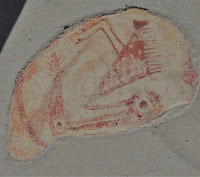 But it doesn't end there! Other notable touches include handmade and hand-placed the 200 shards of replica Hohokam pottery along the stars and underneath the bridge on the steps. 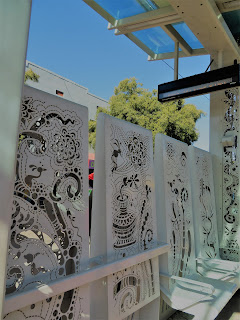 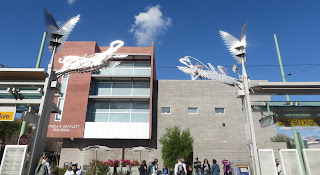 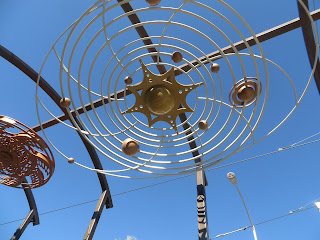 Flight of Time
and as for the rest of Streetcar Public Art go to https://www.tucsonaz.gov/newsnet/experience-tucson-streetcars-art-and-poetry
What a fun and informative way to see the city through a different lens.
at January 11, 2019