Homer may have been the first poet, but no writer in history before or since has written verse more beautiful than William Shakespeare's. His birthday is celebrated on April 23. Shakespeare was born in 1564 and did not leave behind any personal papers. So much of what we know, or think we know, about him comes to us from public and court documents, with a fair measure of inference and speculation.

As with many poets of long ago little is known about his early life. When he was twenty-one he headed to London to work in the theater as an actor and writer. His plays won praise from nearly everyone who saw  them.
Shakespeare's plays can be thought of as long poems. He wrote his lines with careful attention to their length often with ten syllables in each line and sometimes used rhyming words at the end.

The following information came from WritersAlmanac.com and I thought quite interesting.

Though biographical details may be sketchy, his literary legacy is certain. He wrote 38 plays, 154 sonnets, and a couple of epic narrative poems. He created some of the most unforgettable characters ever written for the stage, and shifted effortlessly between formal court language and coarse vernacular. The Oxford English Dictionary credits him with coining 3,000 new words, and has contributed more phrases and sayings to the English language than any other individual. His idioms have woven themselves so snugly into our daily conversations that we aren't even aware of them most of the time, phrases such as "a fool's paradise," "a sorry sight," "dead as a doornail," "Greek to me," "come what may," "eaten out of house and home," "forever and a day," "heart's content," "slept a wink," "love is blind," "night owl," "wild goose chase," and "into thin air."

Macbeth was written around 1606. This play is filled with ghosts, witches, and other spooks. The story tells of a Scottish nobleman who plots to become king through murder and treachery. During the play the nobleman seeks advice from a fearsome crew of witches. These following words from the play just seem to roll off the tongue as one recites them and are easy to memorize.

Fillet of a fenny snake
In the cauldron boil and bake;
Eye of a newt, and toe of frog,
Wool of a bat, and tongue of a dog,
Adder's fork, and blindworm's sting,
Lizard's leg, and howlet's wing-
For a charm of pow'rful trouble,
Like a hell-broth boil and bubble. 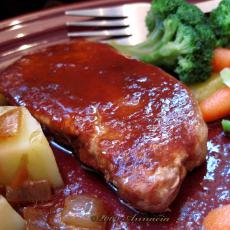 Cook's notes: Chinese pork ribs are known for their spicy, sticky sauce. The glaze in this tenderloin recipe comes real close to the ribs ordered from a Chinese or Asian restaurant. The sauce is very tasty and its distinctive flavor comes from the unusual blends of spices. The sauce can be made ahead and refrigerated till cooking time. Since the basic sauce recipe makes a small amount I doubled the recipe.
These pork tenderloins can be grilled and basted with  sauce during cooking time (of course this all depends on being able to reach your grill and not having snow drifts as an obstacle :)
recipe comes from cuisineathome.com
Ingredients:
Directions: